Having traveled quite a bit, I’ve observed that I inevitably fall head over heels for every single place I visit. I’m sure everyone’s felt that “Please, let this vacation never end.” sentiment. I’ve never felt this with as much intensity as I did in Greece. Leaving each city was as heart breaking as it was exciting to go to the next city. As part of this journey, allow me to introduce you to the beauty and wonder of Athens.

As the aircraft flew from land to sea and circled back to the runway, I could tell this terrain was inimitable and that I was Athens’ latest victim. Victim to her history, the associated mythology, monuments, streets and limitless grandeur. Athens stood out from the cab ride to the apartment and never ceased to do so, not for a single moment.

The cab driver, an eccentric fellow who greatly resembled Ian McKellen as Gandalf in LOTR (More specifically Gandalf the Grey) drove at the speed of light, blaring his very quirky taste in music and tried to manage conversation over the sound of his tunes. On learning we’re from India he immediately took his eyes off the road and hands off the steering wheel to switch the song on his iTouch to play what appeared to be an upbeat remix of ‘Pardesi Pardesi’ from the Bollywood movie Raja Hindustani. After quickly recovering from the numerous mini-heart attacks induced by Gandalf’s carefree driving, this ‘Pardesi’ in Greece (the word ‘Pardesi’ in Hindi translates to ‘Foreigner’) finally relaxed her shoulders, rolled down the window and soaked in the air of Greece while tapping her toes to the beat. After some more interesting conversation he dropped us (my family and I) off at the street we’d call home for the next few days.

We got exceedingly lucky with this beautiful apartment located at the centre of Athens, in the Kolonaki neighbourhood. Streets lined with the most magnificent boutiques, cafes and restaurants. It was at this point I begun to grasp how aesthetically pleasing this country is as a whole. The apartment was spacious, beautiful and luxury brought to life, in an iconic building of 1928 which is a precious gem of the Greek Neo-Classic style. It truly made this stay luxurious and lavish. I’d wake up every morning, engulfed by the aroma of freshly baked goods from the bakery downstairs which had us all salivating instantaneously and forced us out of the apartment early every morning to make the most of the day. Cakes, pies, fresh juicy fruits and Greek Coffee, could you ask for a better way to start the day?

A glimpse of the Dreamy Apartment

My family and I are the kind who love exploring a place on foot, to us there is no other way. On the first day, we took to the streets of Athens and decided the first on the agenda was the historic, Olive Tree baring Acropolis. For those of you unfamiliar with Greek mythology: King Cecrops was to decide the patron God of the city then known as Cecropia. The two contenders were Poseidon and Athena. Poseidon presented the people of Cecropia with the gift of water, which meant the promise of no droughts but they found that the water was salty. Athena on the other hand, presented them with a seed which she thrust into the ground and a tall Olive Tree grew in its place. The people were pleased with this as it meant oil, food and firewood. Athena was triumphant and hence Cecropia was named Athens and Athena was now the patron deity of Athens.

However, that’s just the cherry on top, the entire climb to the Acropolis has more historical importance and tales associated with it than there will be episodes of Grey’s Anatomy in the year 3000. Temple of Nike, The Parthenon, The Erechteion, the grand Odeon of Herodes Atticus (an ancient theatre), the Monument of Agrippa, the Propylaia and the climb up to them littered with little turtles in every corner. All these majestic monuments stand tall and glorious. The not so majestic and glorious being (Me) was wearing footwear which seemed to just slip right off the polished rocks surrounding the Parthenon. I almost felt like I was walking on the largest and most slippery bar of soap. If you’re planning on making this climb, please do wear a sturdy and sensible pair of shoes or risk falling flat on your face at one of the most ancient historic monuments in the world.

Just a display of what women can do if they put their heads together. We can do anything.

The Theatre in the process of what seemed to be a sound check for an event later that evening.

The Glorious Parthenon that once held a 40 foot chryselephantine sculpture of the Greek goddess Athena.

The next day my sister and I were joined by my best friend in the whole wide world. The highlights of the following days go from Kolonaki to Syntagma Square and finally Plaka with little bursts of shopping. Absorbing the history of every temple, church, statue and pillar we came across. Falling in love with the most adorable street, dotted with the cutest doors I’ve ever seen, in all shapes and sizes. Getting quite lost on the way to Monastiraki and being dubbed Shakira, Rihanna and Nicki Minaj by a man with bracelets. Recovering from our misadventure, replacing a skirt with a pair of shorts and making a trip to the National Archeaological Museum on electric scooters that made us true micro mobility enthusiasts. And a special mention for the peacock inspired march during the change of guard with their funky uniform for being so bizarrely unique. One among the many things we were taught by the extremely hospitable people of Athens was the phrase “Yamas!” which is the equivalent of “Cheers!”, a phrase my family adopted without hesitation. While every part of each day was beautiful, eventful and fun, for me the best part was one particular dinner.

I’m a person who likes to ardently plan everything in great detail. In the case of traveling, I love a dining experience with a one of a kind, panoramic view and that brought me to the decision of dining at Orizontes Lycabettus on the hill of Lycabettus which is the highest peak of Athens. We hiked up the hill, a workout to earn our meal and then take the cable car down once we were done. We watched the sun set from this spot, sipping on a dry and exquisite white wine while we indulged ourselves in the flavours of the Mediterranean. We watched as the sun set and the roofs of the city reflected the light that created an illusion of a glittering city. It was one of the most unforgettable dining experiences of my lifetime, incomparable and utterly delightful.

The beginning of the hike to dinner

View of the Acropolis from Lycabettus 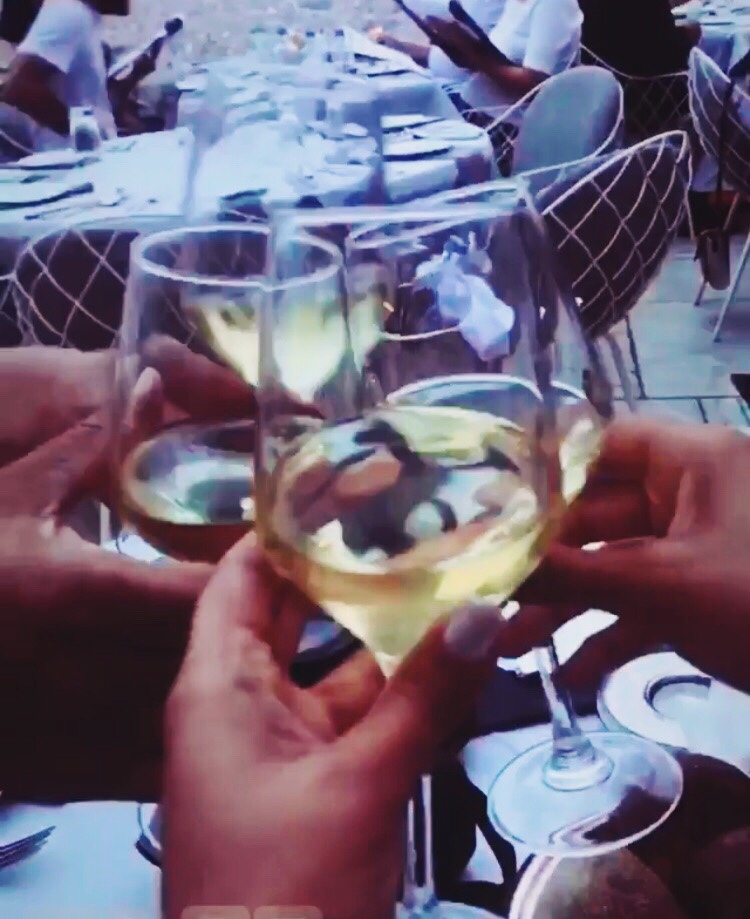 I realise that I have rambled on a lot about this trip with not much attention to the food and drink. To summarise my experience, I’ve had the most wholesome and splendid food in Athens and haven’t been disappointed except when I tried Ouzo. Ouzo, is not for me. It’s an anise flavoured liquor. To all my fellow Indians the best way to describe the taste would be sugar coated fennel seeds (Saunf) and alcohol put together. Apart from that one specific drink, Athens fed me three wonderful meals a day and I don’t think it’s capable of falling short. The food was always vibrant, with bright colours radiating the flavours of the plate.

My very first meal in Athens.

The gist of it: Athens felt like a warm hug bursting with love. It was exotic yet homely. Too good to be true, yet somehow all there. Tangible but leaves you convinced it’s all a fantasy. So who in their right mind wouldn’t dig their heels in to the ground and refuse to leave?

Athena won me over, yet another victory under her belt.

Mini islands in Turkey
Cuba - Feels like home!
The Complete and Up-to-Date Guide to Regalbuto
An island of adventure, Siargao! Pt.2
Rating: 5.0/5. From 3 votes.
Please wait...

22 | Travel, Food and Fashion enthusiast. Strongly believe in the importance of Cake and Adventure.