Best Things To Do in Madeira

If it’s your first time on the island, you can’t miss this experience, although be warned it may be unsuitable for cardiac. The carreiros do monte appeared in the early 19th century, a time when they were used as a means of public transport by local residents who wanted to get to the city of Funchal as quickly as possible. Today it is a tourist attraction that keeps the carts just as they are. They are made of wicker, mounted on two wooden “skids” and then pushed by two drivers, the “carreiros”, who dress in white and wear straw hats. They are experienced gentlemen who wear rubber-soled boots so that they can slow down whenever necessary. The ride starts below the steps of the Church of Monte and ends at Livramento terminal – you will pass steep and winding roads and is capable of going up to 38 kilometres per hour, so it’s best to hold on tight and watch out for selfies along the way.

If you enjoy walking in heights and having different panoramic views, riding a cable car is always a good experience. The Funchal Cable Car may be one of the first on your list. It travels from the old part of Funchal to Monte for about 20 minutes. Once up there, you can get off in the basket cars, whose departure point is near the end of this trip. The Botanical Garden Cable Car is a quicker route, lasting just nine minutes, with a bird’s-eye view over the João Gomes Stream Valley, reaching an altitude of 100 metres.

The piles of colourful, tropical fruit impress right at the entrance. They are carefully arranged in the various stalls. The Lavradores Market was inaugurated in 1940 and has architecture typical of the New State. It became the major supply hub of the city and today continues to be much visited by locals, as well as tourists in search of tasting pure passion fruits or crossed with other fruits, mangoes or fruits never seen before.

Any time of year is a good time to dive into the island’s sea, where the temperatures are always mild. Take the opportunity to do it in the middle of a boat trip, one of the unmissable experiences in Madeira. There are several companies that organise half or full-day trips and you’re almost guaranteed to see dolphins. With luck, you may also see turtles or whales, always with an explanation from the boat captain. 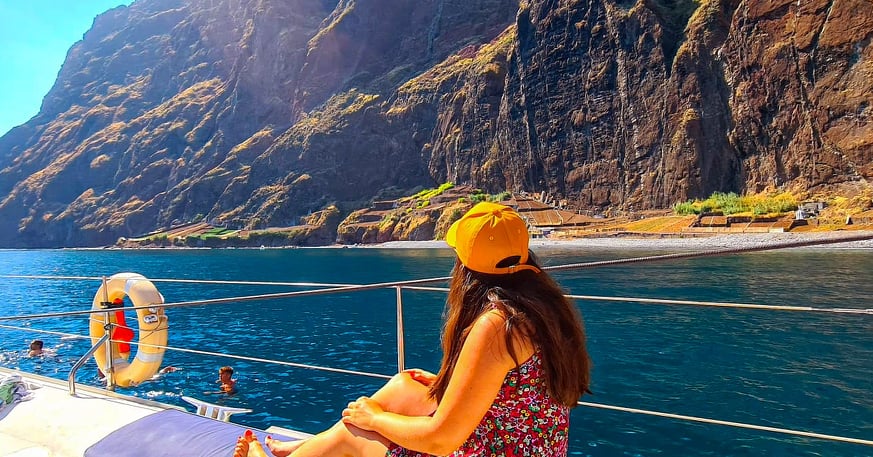 The houses of Santana

The houses with thatched roofs are one of Madeira’s tourist attractions and you’ll find them on magnets and postcards. They are located in the Santana area, north of the Island. Originally these houses consisted of an attic, where agricultural products were stored, and the ground floor was the living area, divided in two parts. The municipality of Santana, which in 2011 received the distinction of “biosphere reserve” by UNESCO.

It is on top of a hill and therefore guarantees incredible views over the bay of Funchal. The property was transformed into a farm in the 18th century by English Consul Charles Murray and after passing through various hands, it was in 1987 that it reached Joe Berardo, who donated it to the Foundation he created and christened Monte Palace Tropical Garden. Since the acquisition, it has been renovated with exotic plants endemic to various countries or with plants indigenous to the Madeiran forests. It also has ponds with Koi fish, a collection of ceramics, a panel of glazed terracotta tiles telling of the adventures of the Portuguese in Japan or other panels with events from the History of Portugal.