Two years ago we went to Foiano to participate in the legendary Carnival. Mythical because it is not a carnival like all the others, but there are important themes behind these disguises and/or floats, such as the world situation, political, climatic, human rights … The Carnival of Foiano della Chiana is an event that takes place annually in Foiano della Chiana, in the Province of Arezzo. It is one of the most famous and ancient Italian carnivals, dating back to the first edition in 1539 which, unfortunately, last year, due to a pandemic, did not take place. 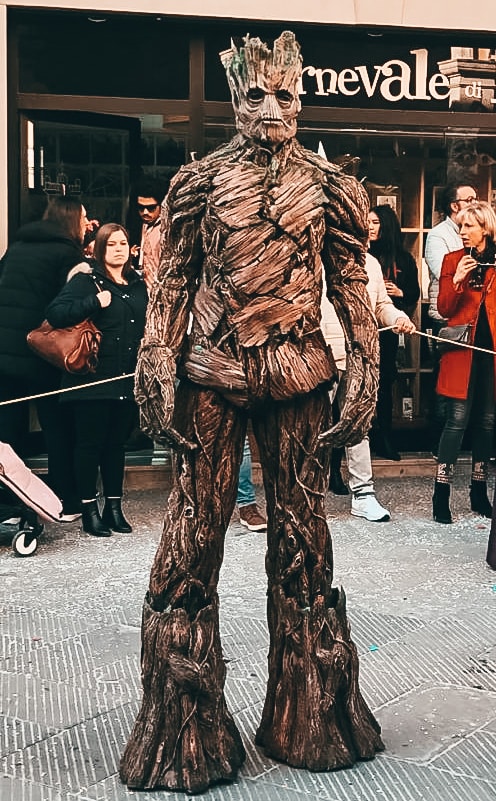 The four Cantieri (Azzurri, Bombolo, Nottambuli, and Rustici) in which the city population is divided participate in the Foiano Carnival. These, during the year, each works on an allegorical float, trying to make it better than the others. The winner, a good race, wins the Carnival Cup 🏆.

During the year, the Cantieri each work on the creation of a papier-mâché cart, which allegorically presents a theme freely chosen by the Cantiere, a theme that is the same for all four. The four shipyards all work in a single building, obviously divided into four sectors. The work is carried out in absolute secrecy by all shipyards and this means that during the whole working year an aura of mystery is created around the subjects and themes of the wagons. We believe that this thing is very suggestive, not knowing the theme is more tempted to participate in this carnival!

The race takes place on the three Sundays preceding Shrove Tuesday and on the next two, during which each Shipyard parades through the city streets with its own wagon. Each parade is called a “masked course“. The floats are evaluated by a jury made up of five jurors: a painter, a sculptor, a set designer, an art critic and a journalist (since 2001), chosen by a notary, in turn, appointed by the President of the Carnival Association of Foiano della Chiana. The verdicts of the jurors are read at the end of the fourth and last masked course and are unquestionable. The Shipyard that organized the one deemed most relevant and effective is awarded the appropriate Masquerade Award (also known previously as the “Sympathy Cup“). At the end of the last masked course, a parade of masksis staged whose participation is open to all: the organizing committee of the carnival judges the masks, awarding the three most beautiful. This is followed by the funeral of “King Giocondo“, better known as “Rificolonata” 👑: the King of Carnival, personified by a giant puppet made of rag and straw, stuffed with firecrackers (the so-called damselfish), with the number of the edition just released. The playful king is brought to the square followed by the band and his subjects who, equipped with “rificolone” (lanterns), celebrate his “funeral“. Then follows outdoor music with a high-pitched throw of confetti, balloons, and inflatables! A party that lasts until aperitif time!

As tradition dictates after the reading of the verdict, the fire of “King Giocondo” is set to sanction the end of the Carnival and is set on fire in the square as the final act of the spectacular ceremony. On the Saturday after the last Sunday of the carnival, the winning shipyard celebrates the victory in the village by making fun of the defeated yards in a “carnival” and ironic way 🎭.

Before being dismantled, the floats are paraded for the last time in June, during the so-called “Carnival under the stars” ✨.