The Giostra del Saracino 🏇 is a chivalrous game that animates the Piazza Grande in Arezzo twice a year, in June, the penultimate Saturday of the month, and in September, the first Sunday of the month. The June joust takes place at night 🌙 and is dedicated to the patron saint of Arezzo, San Donato, while the September joust takes place during the day 🌞 and is dedicated to the Madonna del Conforto. The two events are deeply felt by the Arezzo community, which in the week preceding the event organizes festivals and cultural activities, up to the propitiatory dinner on the eve of the Giostra. 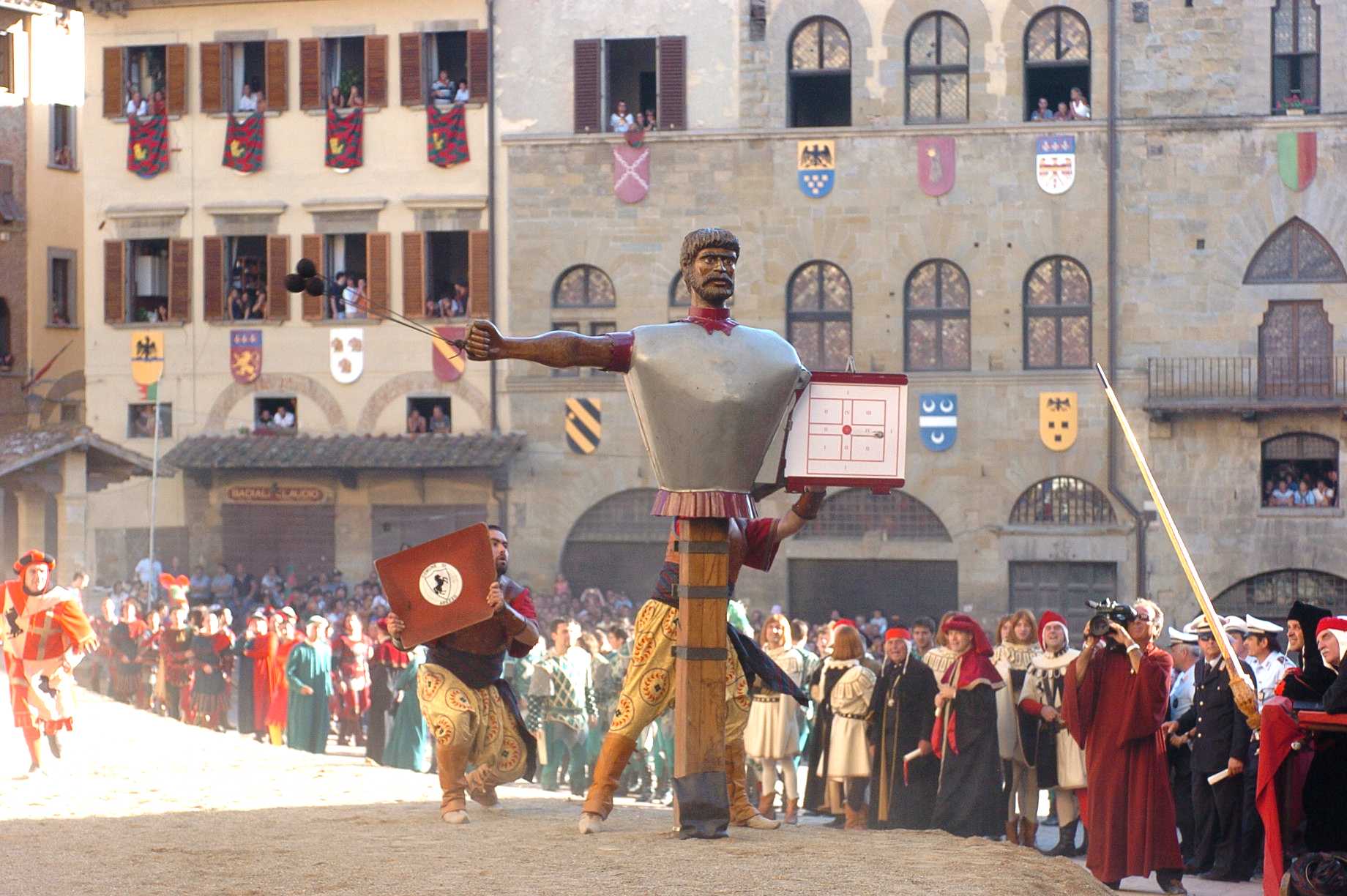 The day of the joust begins with the parade of over 300 figures in medieval costumes and before the race, in the Cathedral, the jousting and horses receive the blessing of the bishop. The historical procession then moves to Piazza Grande, where the flag-wavers perform accompanied by the drums and trumpets of the Music Group of the Giostra del Saracino: at this point, the authorities of the Giostra enter, including the Herald, the Famigli del Buratto, the Valets carrying the trophy, the Golden Lance, and the Field Master.

The division into districts of Arezzo is very old and dates back to the medieval village, with the districts that took the names of the four gates of the medieval walls. The Giostra del Saracino has its origin in that era and consisted of a military exercise, which evolved into a knightly tournament, then into a test of skill. The city statute of 1327 reports the subdivision of the city into quarters and the possibility of celebrating the patron saint with the Giostra.

The first edition of the modern Giostra del Saracino disputed by the four districts takes place on 7 August 1931, on the occasion of the ceremony of the patron saint San Donato. Today’s neighborhoods do not exactly correspond to medieval quarters but have been adapted to modern districts. Porta Crucifera, represented by the colors red and green, extends in the north-east of the city and is based in Palazzo Alberti; Porta del Foro, distinguished by yellow and crimson, occupies the north-west and is located in Porta San Lorentino; the Porta Sant’Andrea district, with its white and green colors, occupies the south-east area of the city and is based in via delle Gagliarde; Porta Santo Spirito, represented by yellow and blue, extends in the south-west sector and resides in the eastern Bastion of Porta Santo Spirito.

The Giostra is a test of skill, a tournament run in less than 5 seconds, in which the joustlers face the Buratto equipped with a shield in his left hand and a flail (a medieval whip equipped with three balls of wood and leather) on the right. Each district has two careers available to score the highest score and thus obtain victory.

The knights have the task of hitting the wooden shield of the Saracen with the spear avoiding the blow of the flail: the Buratto is in fact activated by a spring that makes it rotate so as to lash a blow with the flail and thus subtracting points from the jouster. To establish the points earned by the jouster, a billboard divided into sectors by a central cross is placed on the shield of the Buratto: each sector is worth 1 to 4 points, while the center of the cross is worth 5 points. At the end of each career, the billboard is examined and the Herald reads the score.

During a visit to Arezzo it is possible to discover the tradition of this medieval game, thanks to the exhibition “I Colori della Giostra” an exhibition in the town hall that exhibits the costumes of the Giostra. The costumes represent the entire historical procession and allowed adults and children to discover the medieval tradition and its historical value for the people of Arezzo.