Do you know the main Florentine bridges, the most beautiful and oldest ones?
Here they are! 😍

According to Vasari, the bridge was built by Messer Rubaconte da Mandella, a Milanese mayor in 1237 when the bridge was planned by Lapo or Jacopo Tedesco. It had eight arches at first, but due to the narrowing of the riverbed, it was lowered to six, and then to five once the Lungarni was built.
The bridge withstood all floods that swept away all or parts of the other bridges. On the two sides of each pine cone were built huts that served as shops and also as retreats for devout women, the Romite del Ponte or Murate, who eventually established the famous monastery of the same name, and as a shelter for the impoverished, including the poet Benedetto Menzini. The adjacent Alberti had built a chapel to the Madonna delle Grazie on the first pine cone of the right bank, giving the bridge its more current name. When the bridge was widened in 1875, all of these structures were removed. It was not because of a torrent of German mines in 1944 that it was destroyed for the umpteenth time. Peace was sworn between duels and Ghibellines in 1273 on the left bank of the Arno, where the Piazza dei Mozzi now stands, in the presence of Gregory X, Balduino emperor of Constantinople and Charles I, king of Naples, a short-lived peace, as the indignant pope left Florence after having excommunicated it. 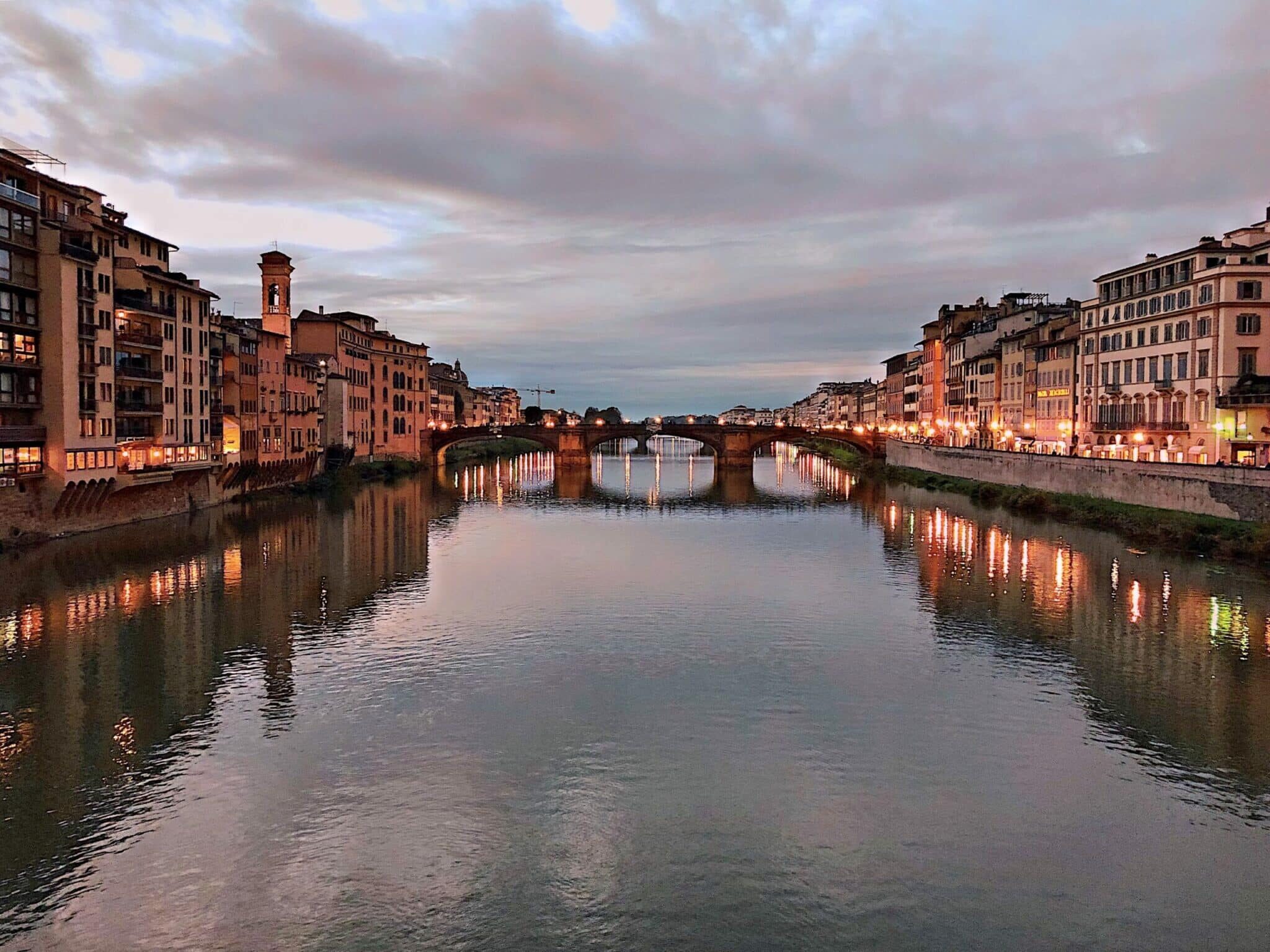 It is the most famous stretch of the Arno, with a history dating back to 996. It was originally made of wood and was burned and overturned by the floods several times; it was reconstructed in its current shape around 1345, most likely by Neri di Fioravante. The 48 stores on either side were originally used for various arts and crafts, particularly the butchers’ Arte dei Beccai; later, they were reserved for goldsmiths and silversmiths; and the protruding back shops were erected throughout the 17th and 18th centuries. Above the shops on the left, Vasari erected a hallway to connect Palazzo Pitti and Palazzo Vecchio in 1565. Cosimo, I fell in love with Camilla Martelli, who lived in one of the houses across, while it was being built. Camilla began her relationship with the widowed Grand Duke of Eleonora of Toledo as a lover, then as his wife. A hospice, first of the Templars, then of the Knights of Malta, stood at the end of the bridge leading to Borgo S. Jacopo. In 1513, Ariosto spent six months there and became acquainted with the lovely Alessandra Benucci, who had also traveled from Ferrara to spend the first months of her widowhood. Ariosto was the start of a love affair that would endure the rest of his life. 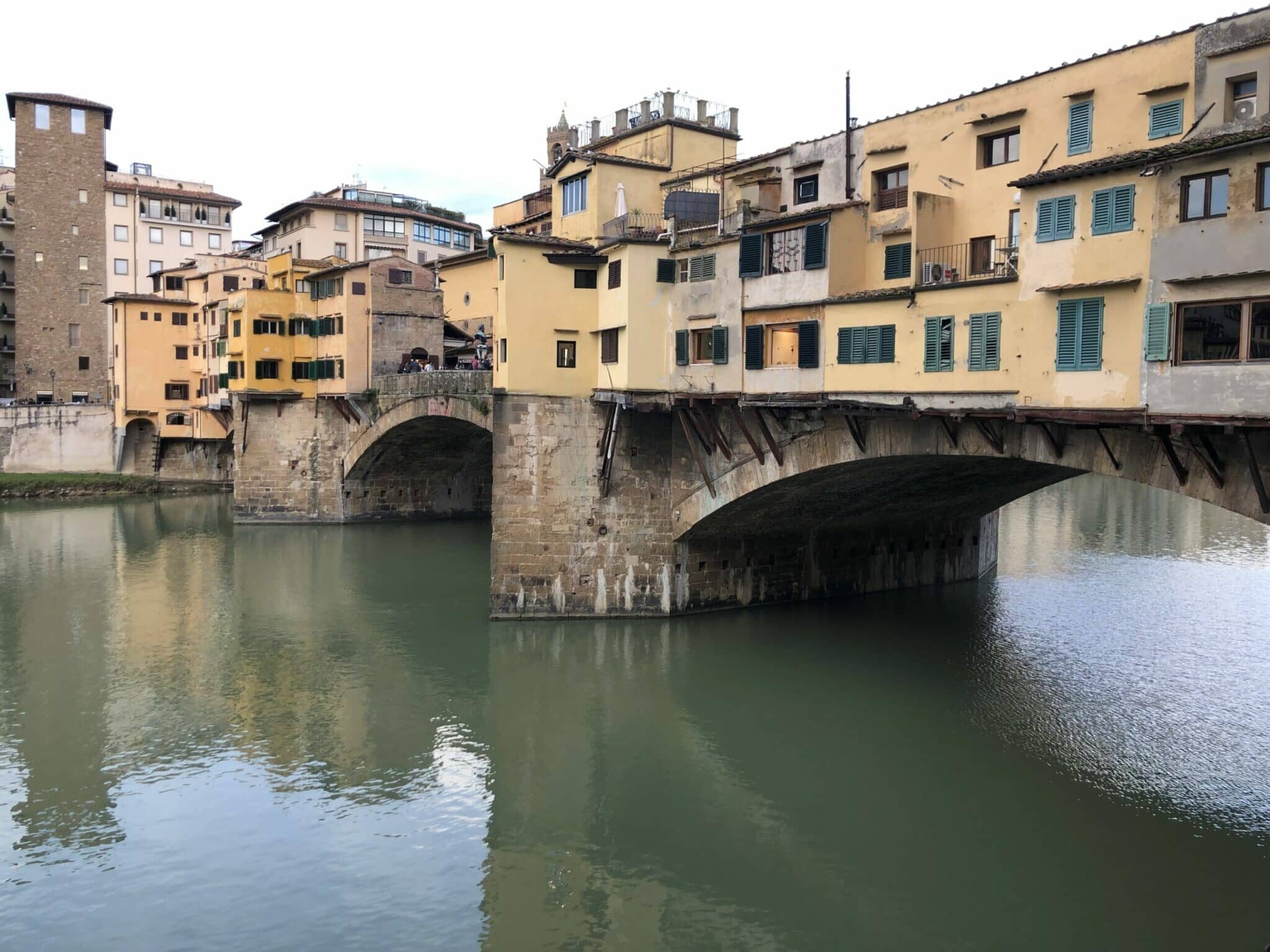 
According to the neighboring Vallombrosani monks’ church and ex-convent, the city’s most beautiful and luxurious structure, it was rebuilt three times after being swept away by the Arno’s floods, excluding the German army’s mines. By command of Cosimo I, the sculptor and architect Bartolomeo Ammannati constructed the foundations for the bridge in May 1507 and completed it in September 1570. This bridge’s structure was magnificent, a work of art in terms of strength and aesthetic. It is one of the most beautiful bridges in all of Italy, as well as one of the most graceful in Europe, according to Giovanni Spadolini.

The four seasons sculptures were erected in 1608 to commemorate Cosimo II de’Medici’s marriage to Magdalene of Austria. 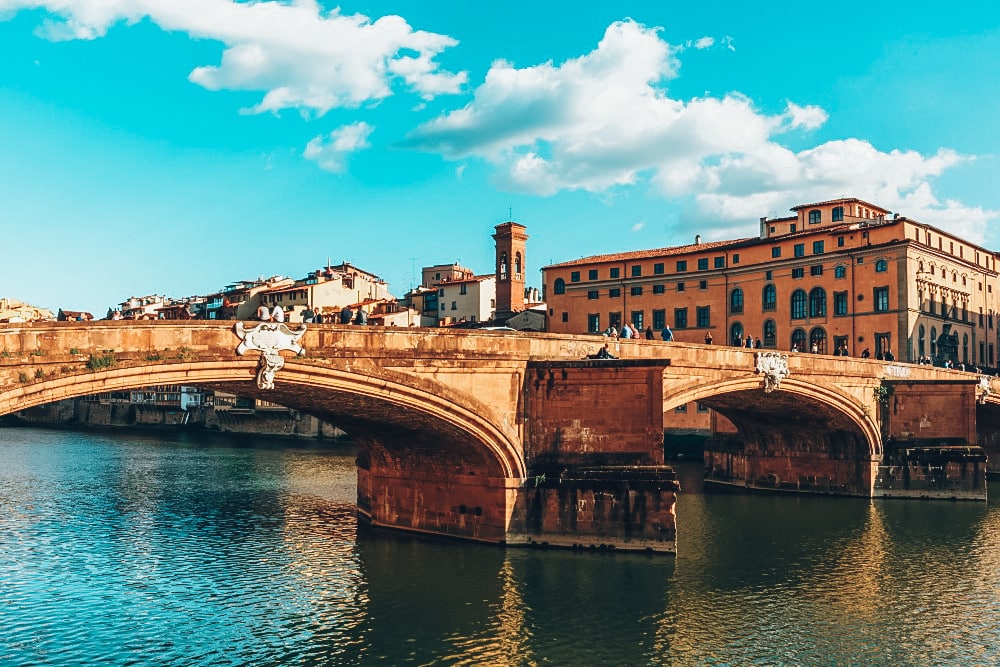 
The Umiliati friars of Borgo Ognissanti built it out of wood in 1218, but it was washed away in a flood of the Arno in 1264. It was afterward rebuilt in wood on stone pine cones by Fra Sisto and Fra Ristoro, but in 1304 it collapsed under the weight of a large crowd rushing to see the Brigata de’Sollazzi of Borgo San Frediano put on a carnival display on the river. According to Villani, the game got so serious that no family in Florence was spared from mourning the loss of a loved one. It was rebuilt only to be carried away by a flood in 1333. Fra Giovanni da Campi totally rebuilt it in stone in 1336; two arches were wrecked by the flood of 1557, and Cosimo I had it installed by Ammannati. Another flood in 1867 shook it but held up very well until the German army destroyed it during the 1944 retreat.

The iron bridge of San Niccol, today Ponte di San Niccol, and the iron bridge at the Cascine, nowadays Ponte alla Vittoria, were finished in 1837 by two French engineers, the brother’s Marc and Jules Séguin. The one over the Ponte alle Grazie was washed away in November 1844 by the Arno’s big flood and was rebuilt in 1853. The other crosses the river at a spot where the waters are often so thin that it is possible to walk over them. In 1944, German forces mined and destroyed both bridges as they withdrew.