The Saradiel Village is located in Mawanella about 2 kilometers away from the Colombo – Kandy highway. Approximately 6 acres of area has been used to create this 18th century traditional village. Built with cement, skillfully-built statues make you feel that they are alive. The guide here did a great job explaining the history of Saradiyel step by step. The whole theme based on the stories of Saradiel.

The Robin Hood of Sri Lanka or Soora Saradiyel of Uthuwankanda is a great character, over centuries providing hundreds of stories. Most of these stories are proved to be based on facts. A large number of local and foreign tourists visit this place to see the legends brought back to life. 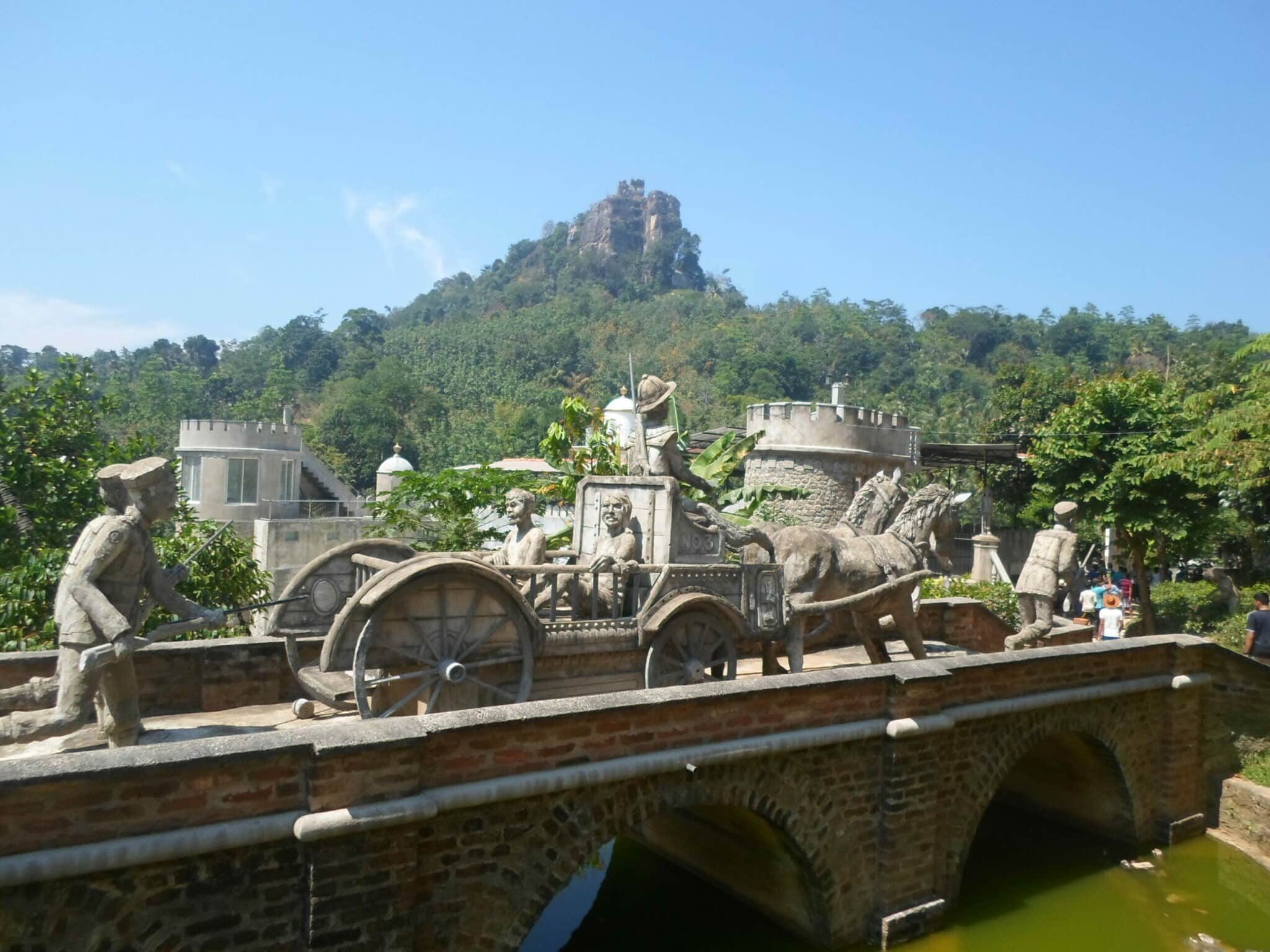 The entrance fee is 100 LKR for a local visitor and 2 Dollars for foreigners and it’s a reasonable rate when comparing with the service they provide. It does take about 1 – 2 hours to complete the trial including all explanations. The Monument shop is also full of traditional equipment and food.

How to get to Saradiel Village

Saradiel is called known as the Robin Hood of Ceylon. Born as Deekirikevage Saradiel Appu, he later became Sura Saradiel due to his legendary status given to him by the villagers. Saradiyel started to rob, later became a famous gangster in the area, and distributed his stolen items amongst the poor villagers. History reveals that Saradiyel was very strong despite being small. He possessed many skills. As we all know, he is an athlete and has a very keen mind. Many times, after being caught, he managed to escape. This sharpness of mind he maintained till the time he was captured. Saradiyel was a hero to the village people. They were moved to tears at the time of his death.

For the British, Young Saradiel was an infamous, notorious rebel. Along with Keppetipola and Veera Puran Appu, Saradiel is often glorified for his gallantry and bravery during anti-colonial struggles. His goal is to free people from the oppression of local elites and whites.

The creator of the Village

The creator of Saradiel Village is a professional doctor. He is also a passionate traveler, and he sees the benefits of recreating history through visual interaction. During his many trips around the world, the idea of ​​building a town emerged in his mind. With the cooperation of Kalbhushana Milton Jayapala, Dr. Gamage finally completed this laborious work and presented it to the public. He started his project in 2008, and the final creation was announced in 2012.

When you enter the village of Saradiel, you will be greeted by the Araachchi (chief) of Beminiwatte. Jayalal portrayed the role of Arachchi and did a great job in this regard. Before arriving, visitors to Saradiel Village from all over the country can relax in Ambalama (roadside hotel). After paying tribute to Dedimunda Deyo, the tour begins with a replica of the hall of the Aluth Nuwara temple. Dedimunda is considered to be the patron saint of Buddha. 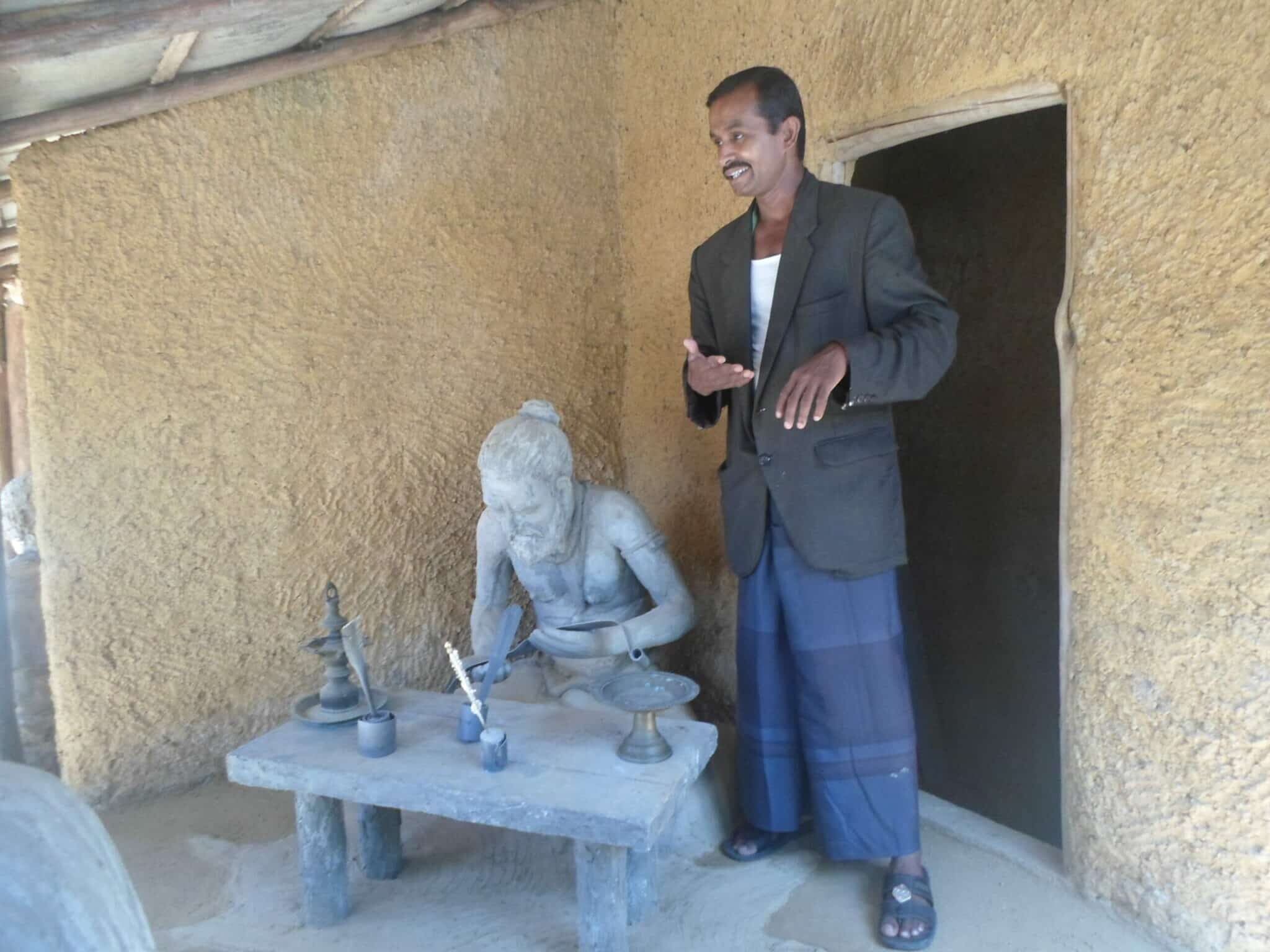 The Village Bazaar in Saradiel’s Village brims with activity. Sculptures are depicting a typical day at Hendrick Appuhamy’s Kopi kade. The sculptures perfectly reflect the ethnic harmony and diversity which existed in the Kandyan era.

There is Pichohamy, mother of Saradiel, serving coffee while a Malay police officer enjoys a helapa (a local sweet wrapped in a leaf). In front of the shop is a gypsy snake charmer who entertains passers-by with his acrobatic monkey. As we all know, Gypsies are descendants of the Thelengu community. Locally, we used to call them Ahiguntikaya (Ahi means snake, and Guntika is a magician).

Next to the cafeteria, you will find a bistro. In the past, men in town would stop here for a pint of wine. This special tavern is run by Renda Raala (tenant) who has no good reputation among the villagers. 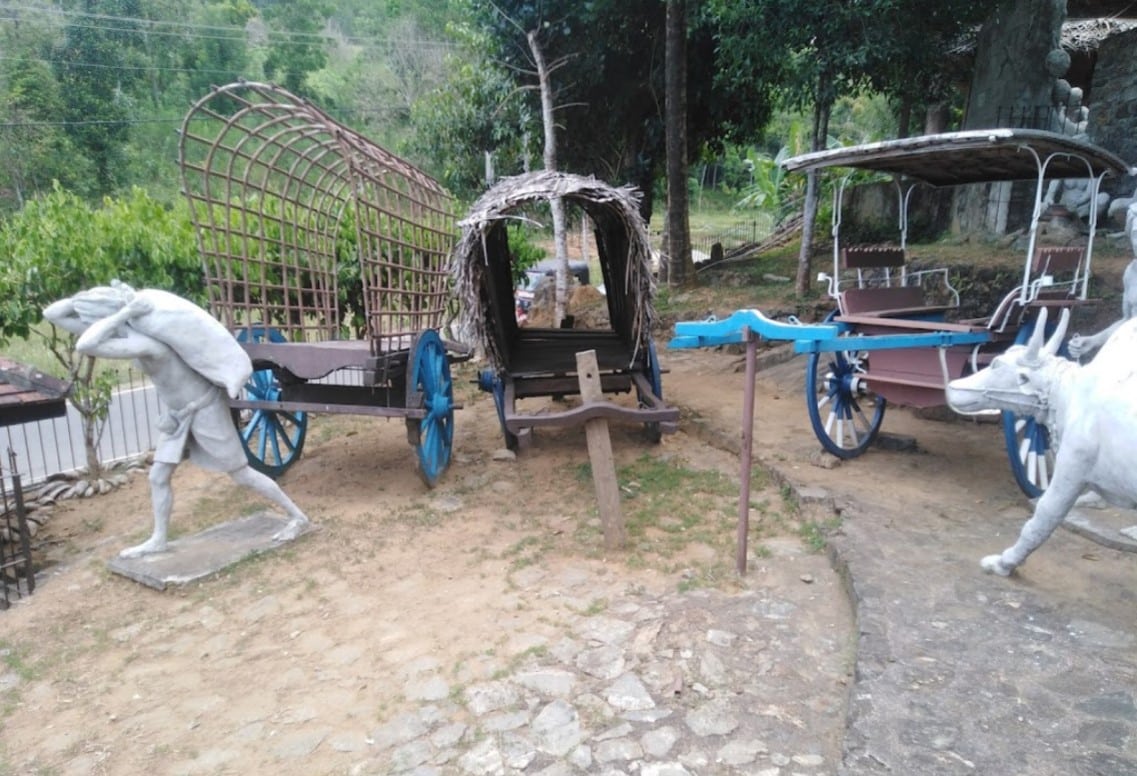 Experience the feel of an 18th century home

The traditional 18th-century mud houses are made up of different parts called as Diyapila, Watapila, and Kottapila. The men in the family will sleep in Kotapila to protect the house from outsiders. On the Diyapila, lies a big clay cauldron that was used to quench the thirst of visitors. On the clay wall, there is a built-in shelf to place the trunk petty in which valuable belongings were kept. There is a Vee Bissa (Paddy’s warehouse) outside the house.

When paddy pods are harvested for the first time, the brothers took them home, and the sisters made a mat and hung it on the wall. Even today, a mat of paddy is hung on the door frame as a symbol of property or sometimes as a part of home decor. 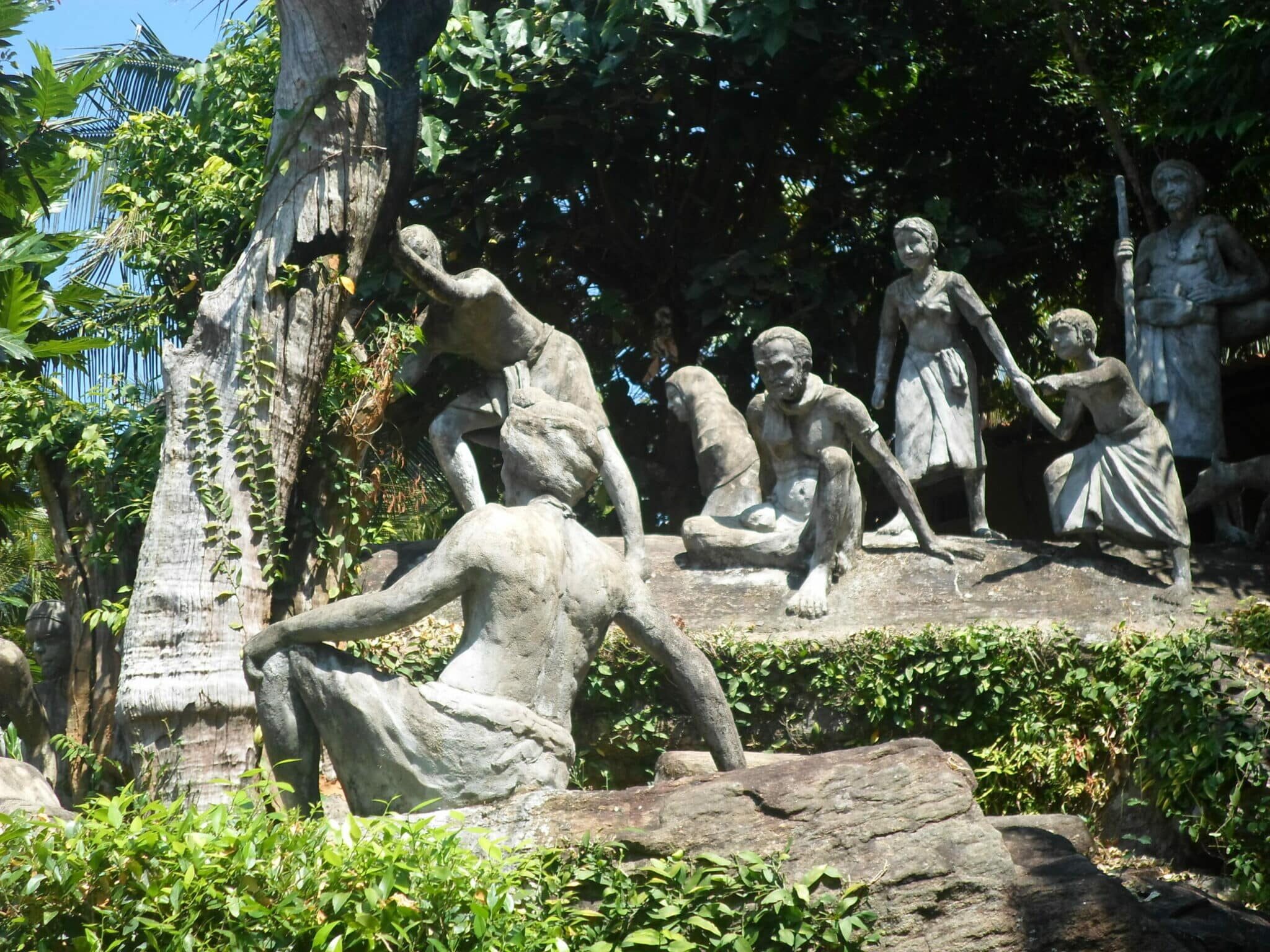 A visit to Arachchi’s house

As the narrator takes you through the village scene, passing by the astrologer’s house, wood workshop, goldsmith and potter’s workshop, you will be welcomed at Arach’s house. During the Kandyan era, only the village chief was given special permission to paint the walls and cover the roof with tiles. On the balcony, there is a Dutch-style armchair. The Araqi family spends most of their time resting in the chair, taking care of the problems in the village while resolving disputes.

The Dandu Kadaya outside is a torture device that was used as a method of punishment inflicted on the convicted persons.

The second half of the tour will take you back to Saradiel’s childhood and rebellion. Along the way, Arachchi would stop by at the ferry, Tikiri Menike’s kitchen, and laundryman’s house to explain how people lived at the time and trade thrived back in those days.

Mammale Marikkar was Saradiel’s closest and trusted friend. His sister Thangamma was the wife of a village mercer known as (Mani Petti Karaya) Cader, who used to sell trinkets from house to house.

At the age of 32, Saradiel and Mammale Marikkar were captured by the British and executed on May 7, 1864, in Bogambara. Subsequently, their bodies were buried in Mahaiyawa. According to historical records, they were the last two people to be hanged in a public place.

Saradiel fought vehemently against the English imperialists and was labeled a bandit by the British. But centuries later, his name and bravery echo over the rocky peaks of Uthuwankanda, reminding us that he was not an outlaw but a hero. If it weren’t for “friends” like Sirimale, who betrayed his friendship and trust for paltry benefits, Saradiel might have lived longer and served his people more. 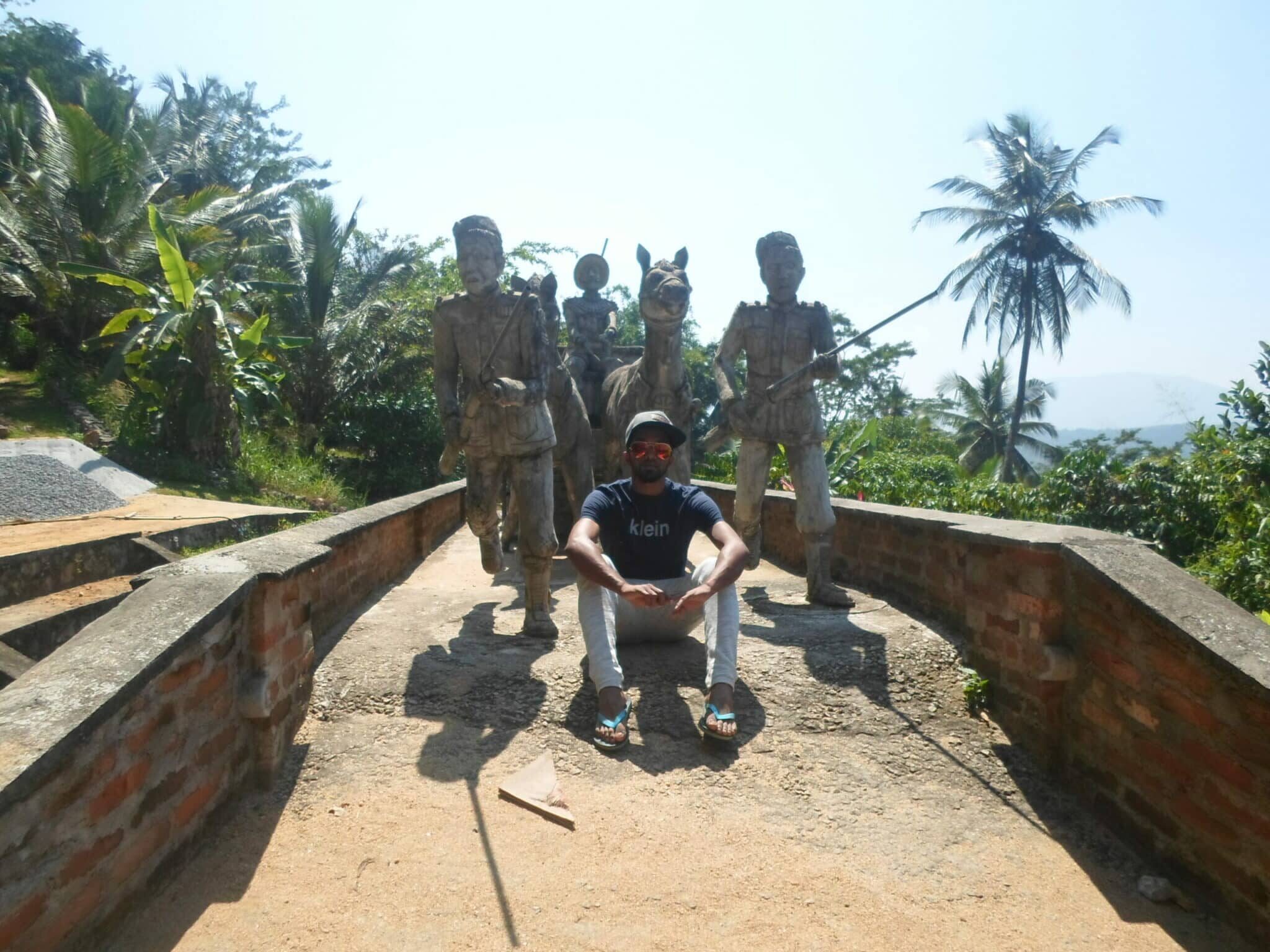 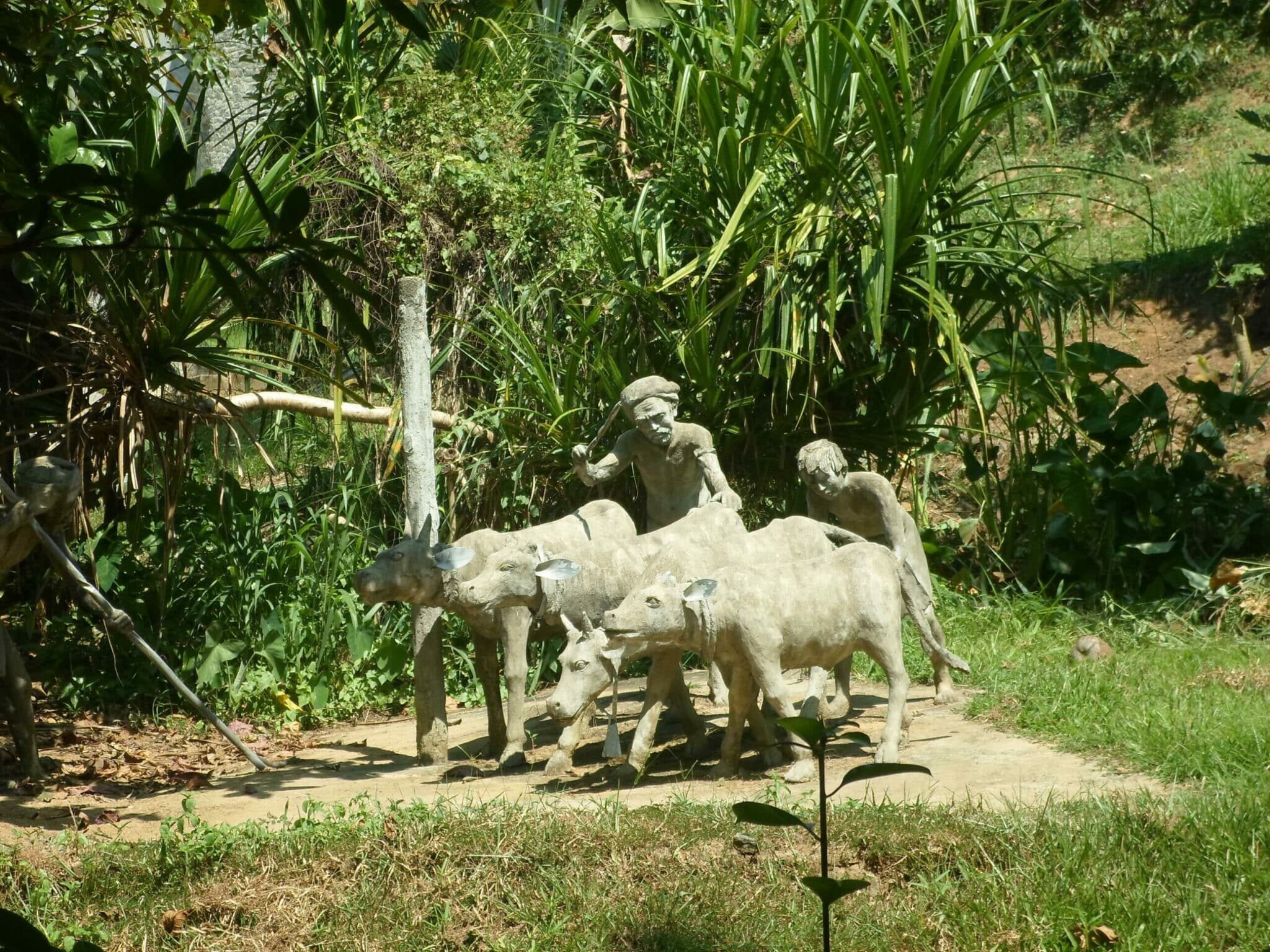 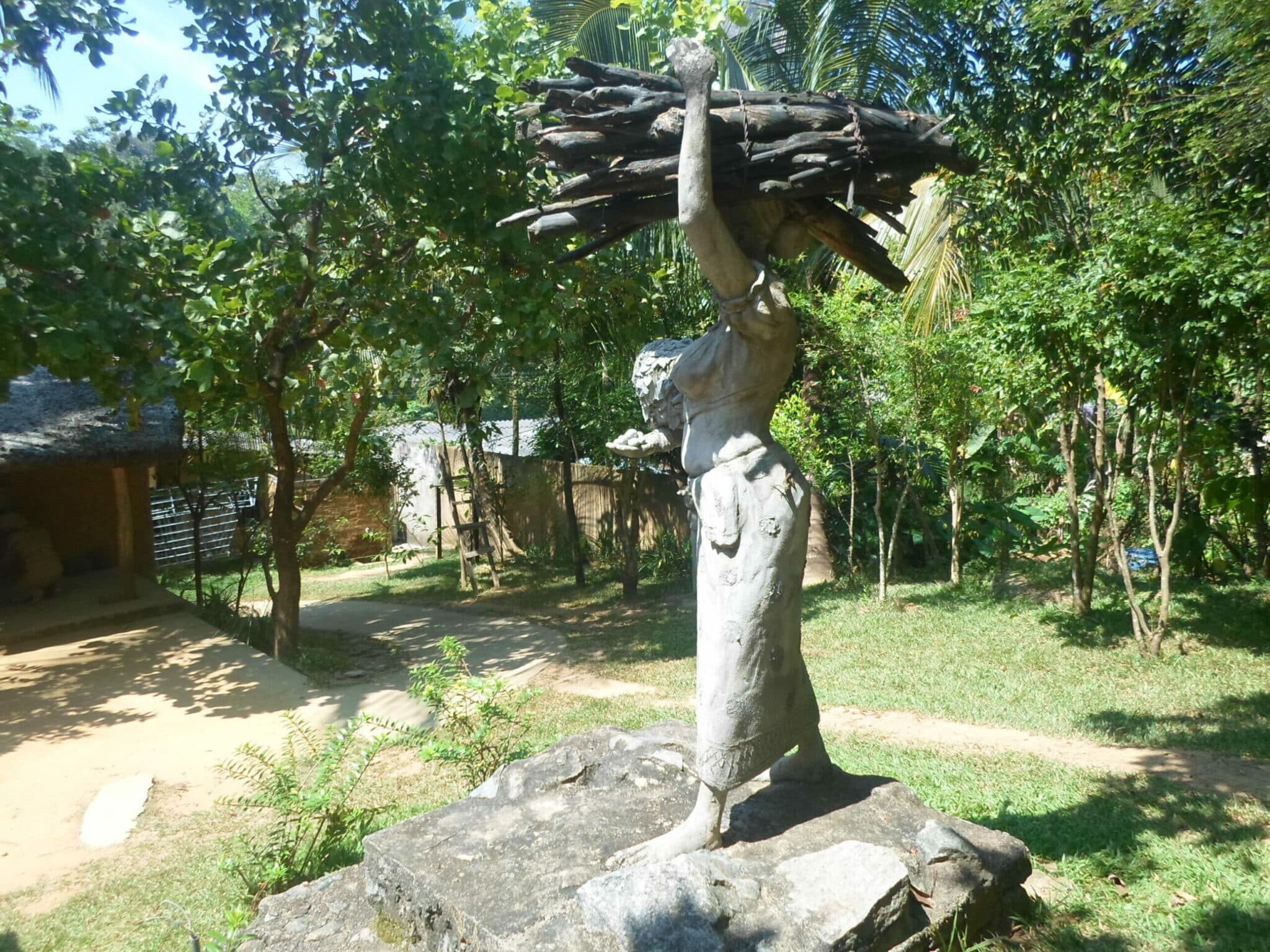 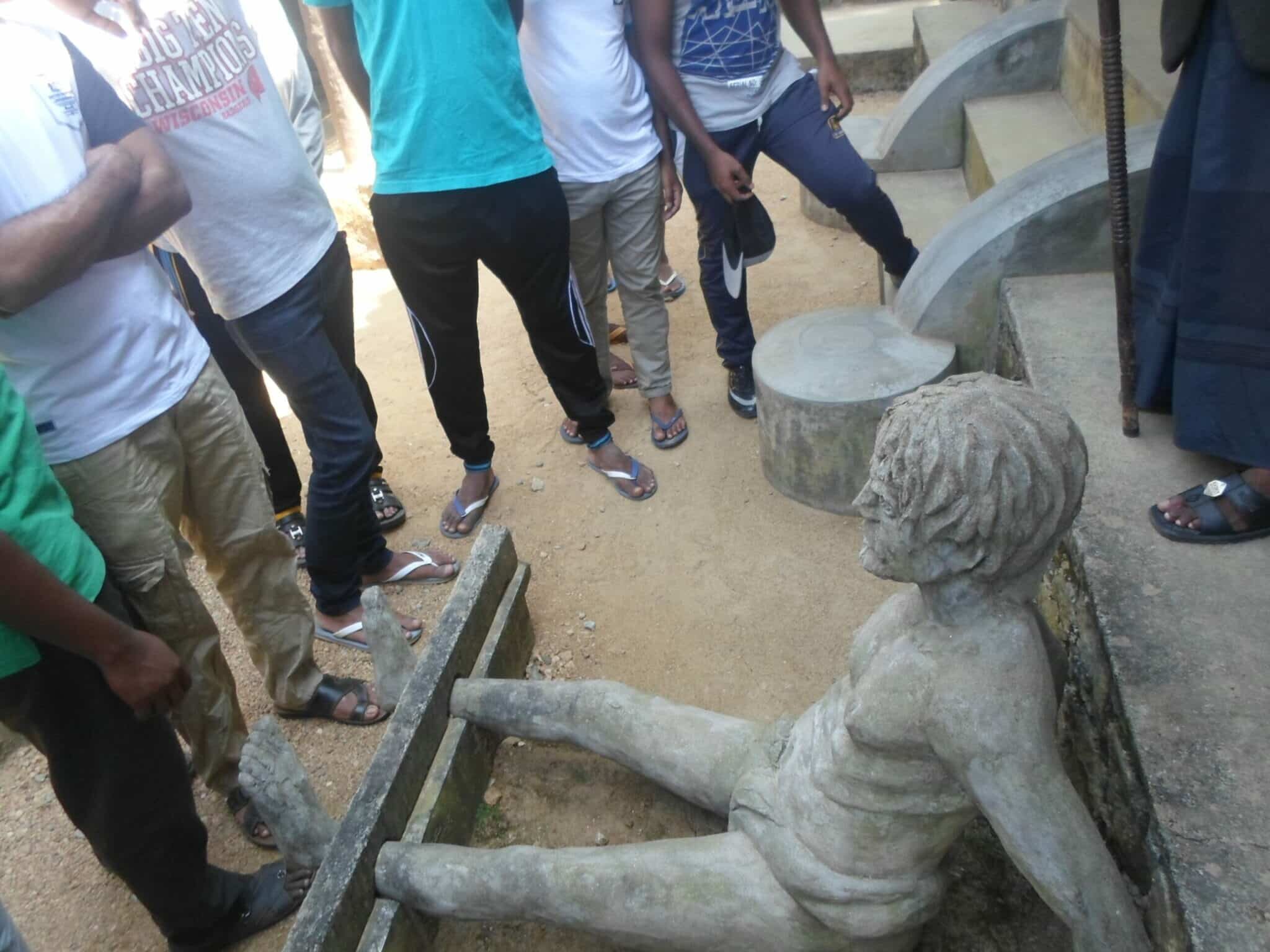 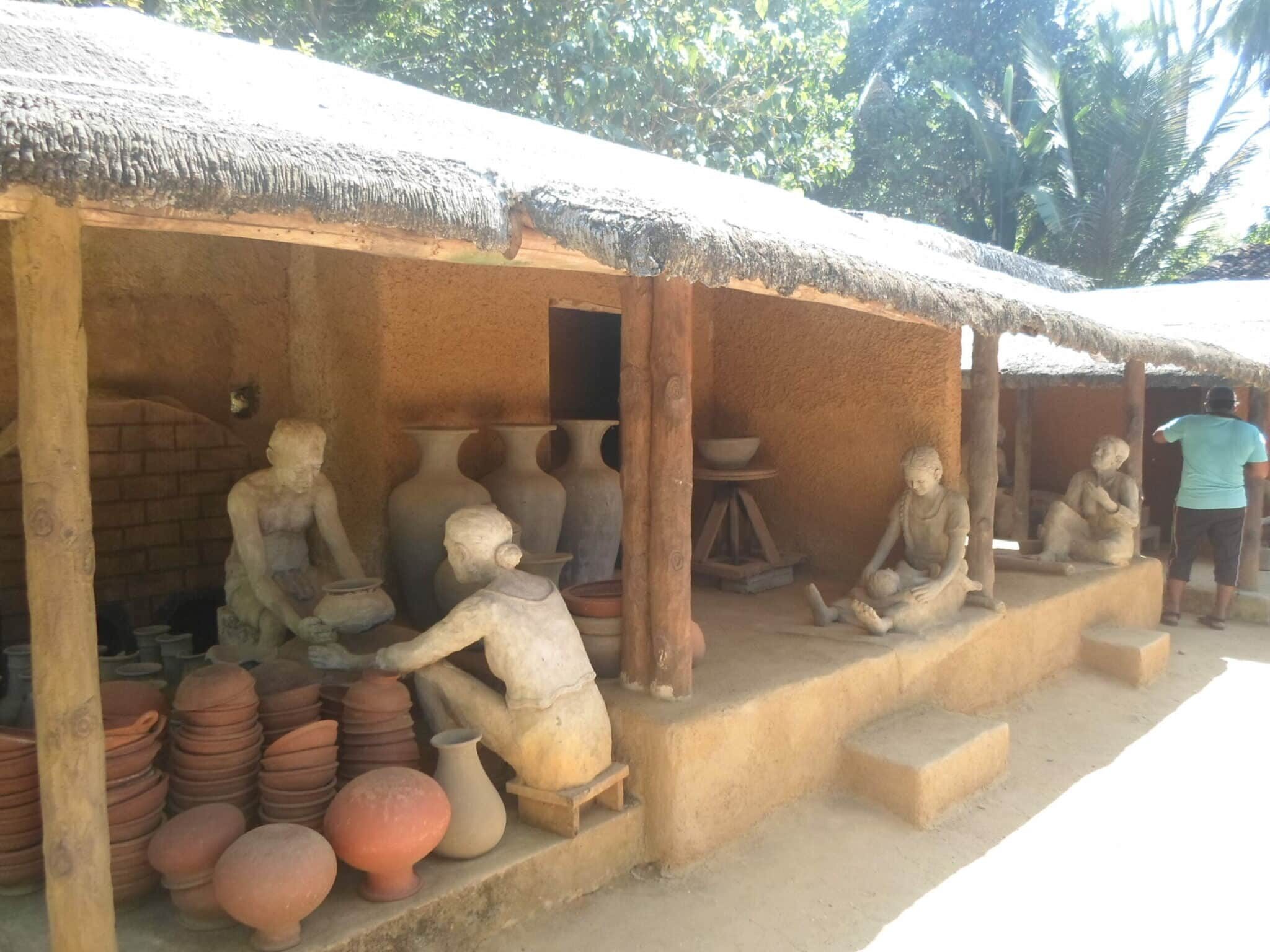 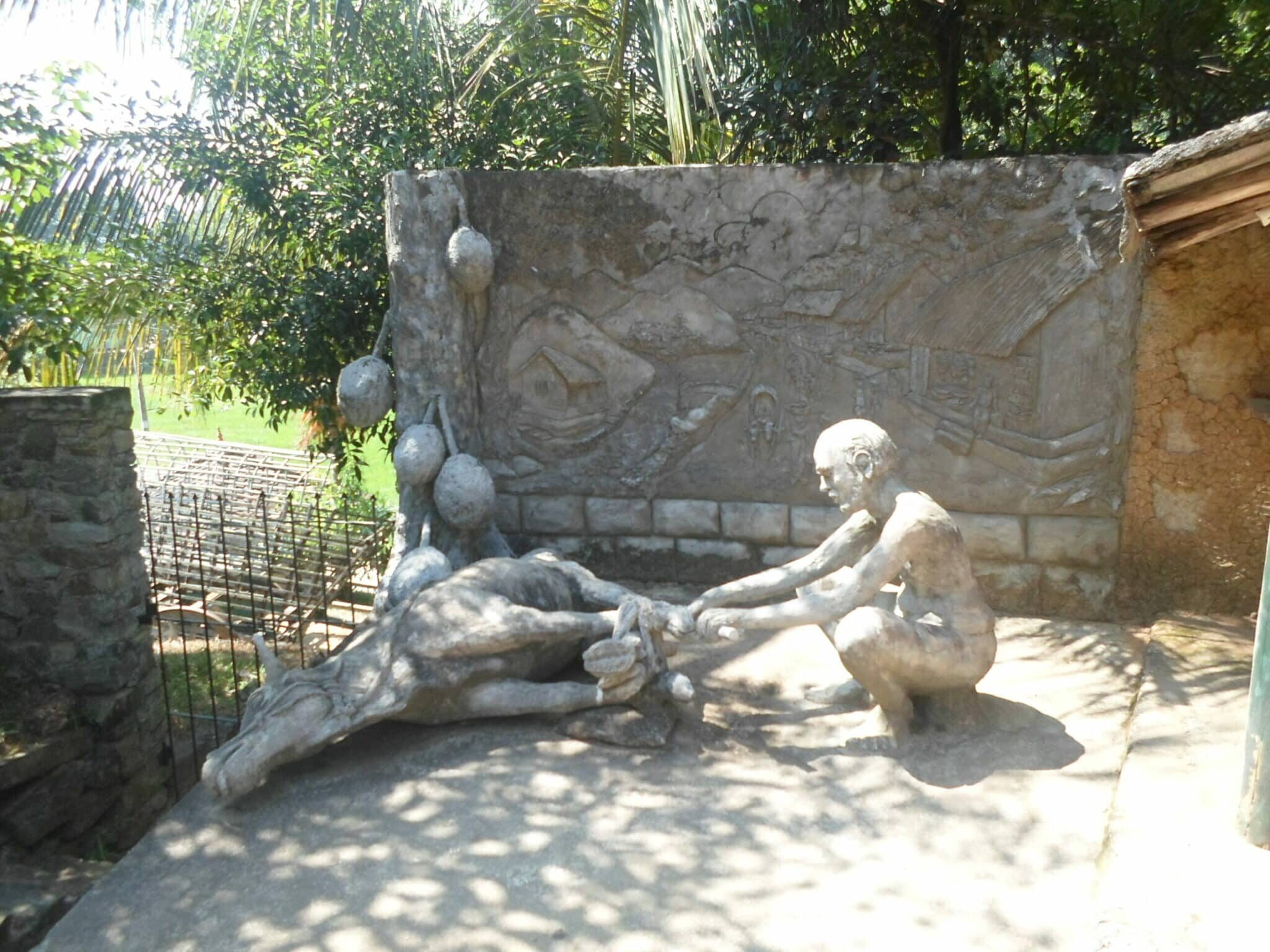 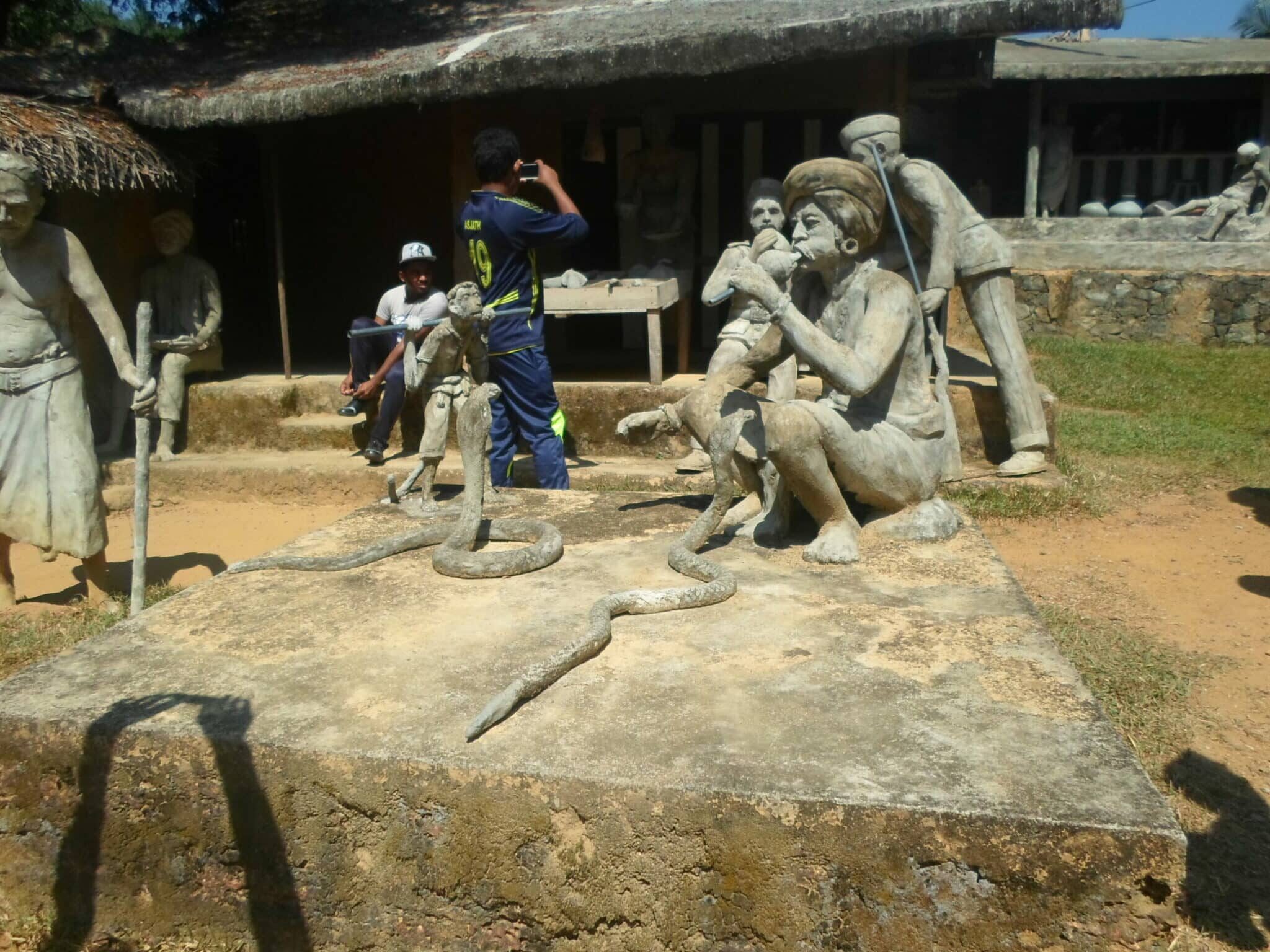