Today, instead, we will talk about the Florentine Medici villas. It is always nice to go and discover the oldest and most aristocratic part of our Italian cities.

The villa of Castello is one of the oldest suburban residences of the Medici family, who owned it since 1477. Declared a World Heritage Site by UNESCO in 2013, the villa is home to the Accademia della Crusca and the splendid garden is a state museum rich in citrus and rare plants decorated with ancient and Renaissance sculptures.

The museum can fully define itself as a prototype of the sixteenth-century Italian garden. It was built starting from 1537 by the will of Cosimo I dei Medici immediately after his rise to power. Highlights of the rich and articulated garden are the fountain of Hercules and Antaeus, a work, now in copy, which can be admired in the original in a room of the nearby Villa della Petraia, where the Venus / Fiorenza by Giambologna is also preserved, and the extraordinary Cave of the Animals or of the Deluge, one of the most famous in Europe, which, conceived by Tribolo himself and originally animated by spectacular water games, in the perfect simulation of a natural cave in which sculptural groups of animals in polychrome marble are assembled, plays a central symbolic role in the complex allegory made in this garden for Cosimo and his successors. In the “wild” of holm oaks, oaks, and cypresses that develops in the upper area, transformed into an English park in the first half of the nineteenth century, stands out the large tank-cistern created by Vasari and decorated by the Apennines or January, a bronze sculpture of Ammannati. The garden boasts an exceptional collection of citrus fruits, consisting of about five hundred plants of historical and botanical importance, unique in the world, descendants of the ancient Medici varieties with specimens of over three hundred years of life. The garden of medicinal herbs is also a real jewel with the Mugherini stove, which houses the rare Indian double jasmine from Goa called “mugherino“, which gives its name to the greenhouse of the so-called “ortaccio” or secret garden. 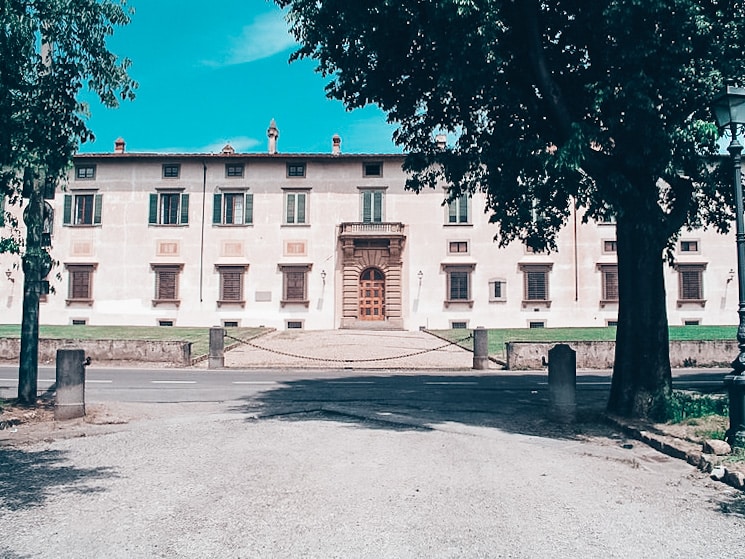 
The Villa stands, with its unmistakable tower in a dominant position, on the slopes of Monte Morello with a splendid view of Florence. The south side overlooks the formal garden which is spread over three terraced floors taking advantage of the slope of the site: floor of the Parterres, floor of the Nursery, and floor of the Figurine. To the north, on the other hand, the romantic park, built in the nineteenth century at the behest of Leopold II of Lorraine, extends for several hectares. Extraordinary is the courtyard, on the ground floor, which has always been the fulcrum of the building, frescoed with two splendid pictorial cycles: a sixteenth-century one referable to Cosimo Daddi with scenes dedicated to the Deeds of Goffredo di Buglione, ancestor of Christina of Lorraine consort of Ferdinando, the another wanted by Prince Don Lorenzo, son of Cristina and Ferdinando, datable to the second quarter of the seventeenth century, made by Baldassarre Franceschini known as the Volterrano and depicting the Fasti Medicei. In the Savoy era, the courtyard was transformed into a ballroom with a glass and iron roof and the closure of the loggias, which are now open again. 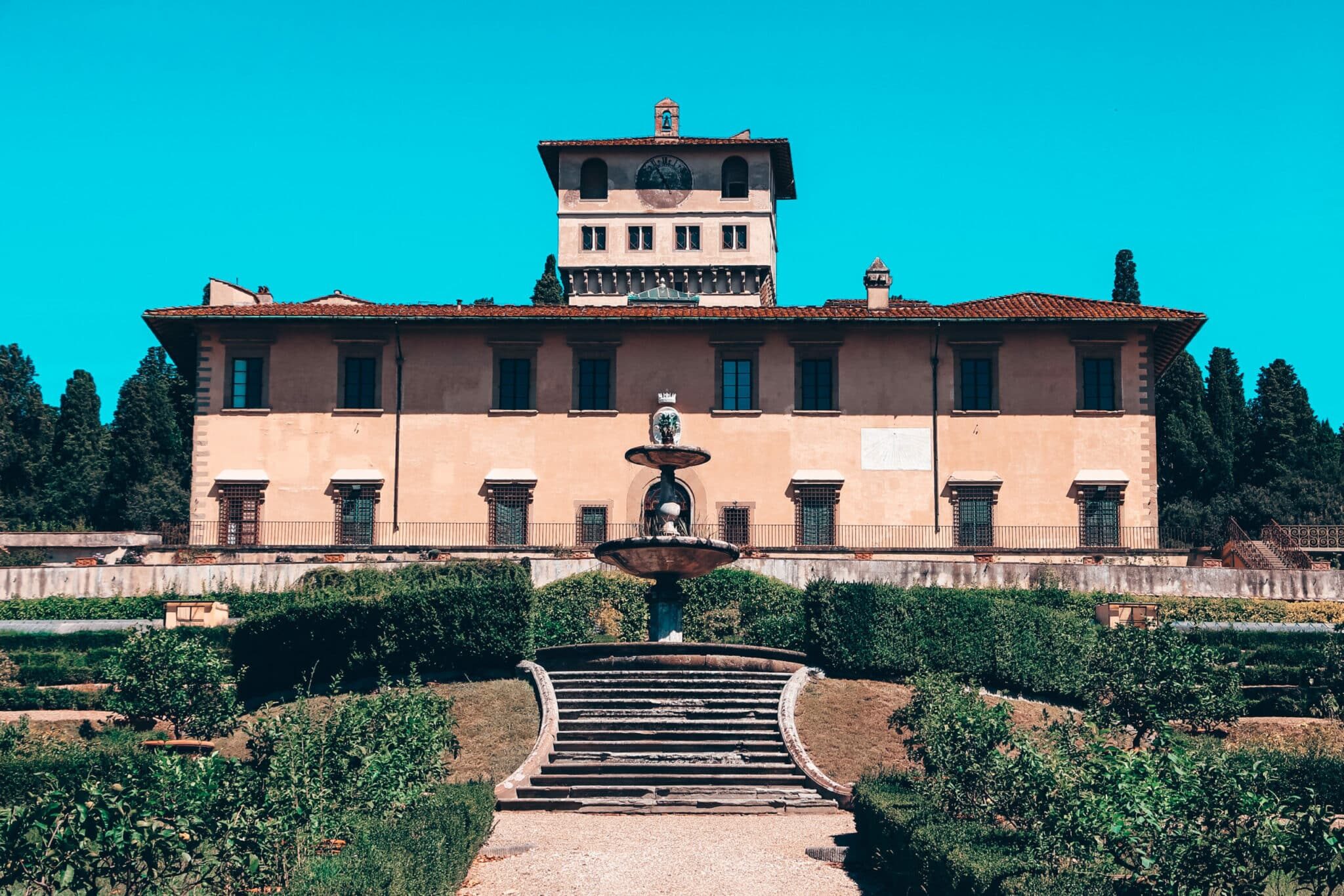 
The Villa declared a World Heritage Site by UNESCO in 2013, was designed by Giuliano da Sangallo for Lorenzo the Magnificent, as an example of Renaissance architecture that blended the lesson of the classics with characteristic elements of Tuscan rural architecture. The decorations on the facade and portico are classic: the pediment bears the Medici coat of arms above the frieze, in which the insertion of polychrome glazed terracotta constitutes an element of continuity with the fifteenth-century Tuscan tradition. The interior bears’ evidence of particular interest left by the important personalities who contributed to the construction and decoration of the villa. Particularly surprising is, on the main floor, the majestic Sala di Leone X, in which one of the most important cycles of Tuscan frescoes of the sixteenth century is almost entirely preserved, created by Pontormo, Andrea del Sarto, Franciabigio, and Alessandro Allori. On the second floor, in the Museum of Still Life, about 200 paintings are exhibited, mostly belonging to the Medici collections. Finally, the garden and park extend outside the Villa, dominated not only by the mass of the villa but also by the large nineteenth-century lemon-house, at the foot of which stand the monumental sixteenth-century stables. 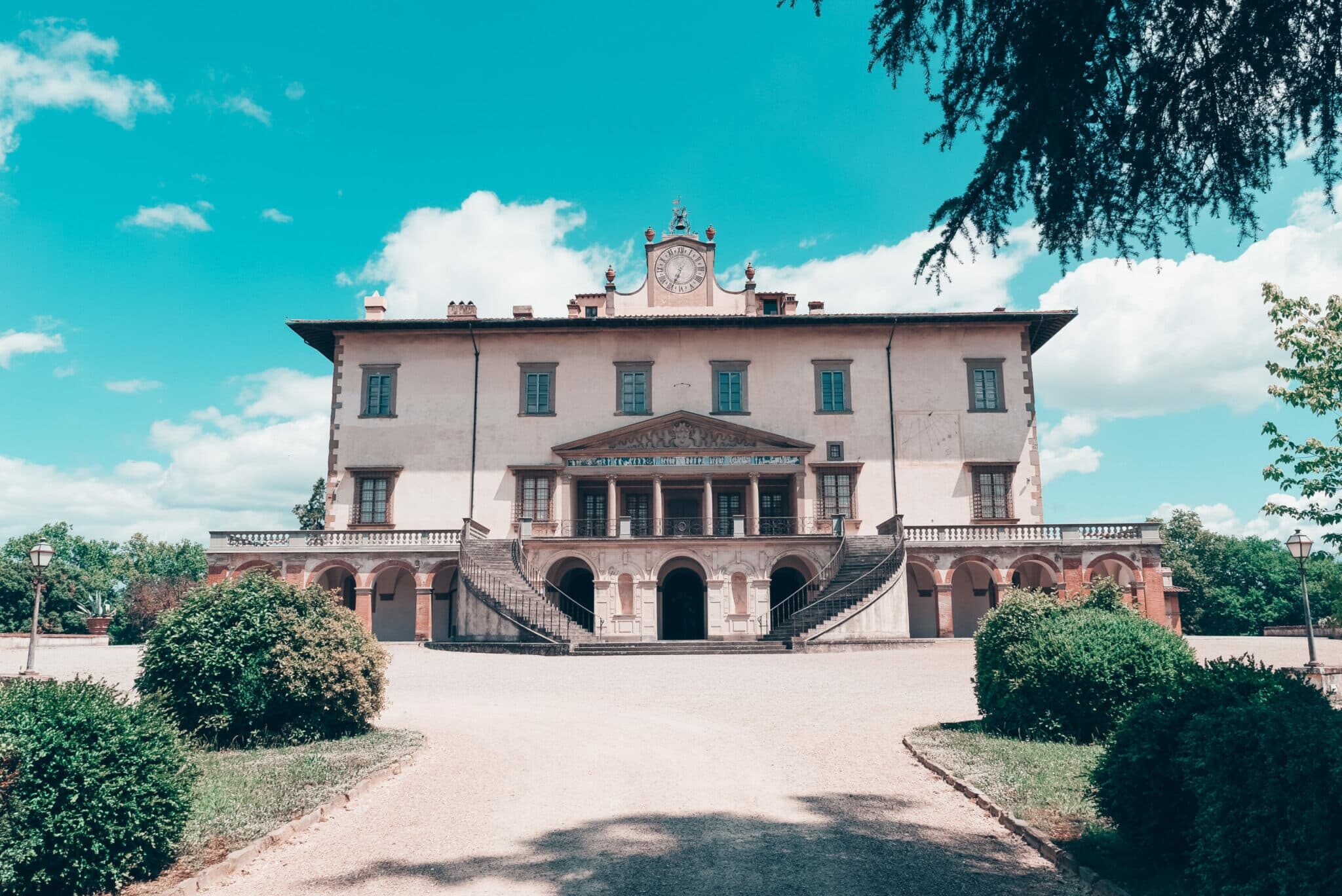 Located in a dominant position on the top of a hill just 40 km from Florence, the Medici villa, declared a World Heritage Site by Unesco, stands in the center of the enchanting village of Cerreto Guidi. Surrounded by a whirlwind of alleys and streets that seem to wind all around the villa in concentric rings, this monumental building will make you experience a kind of blast from the past, at the time of the Grand Dukes of Tuscany. Built on the ruins of a castle owned by the feudal lords I Conti Guidi, the villa was born as a “hunting lodge” for Cosimo I. Today, the imposing structure, covered by a large awning roof, is characterized by a sober facade and composed of a few decorative elements around the door and frames on the windows. The rear part of the façade, on the other hand, has a portico supported by pillars, in turn, surmounted by arches, with bases and capitals without decorations. The villa is built around a central hall which can be accessed directly from the main door, while at the back of the hall there are stairs leading to the upper floor; the villa also boasts a beautiful garden open to the public. 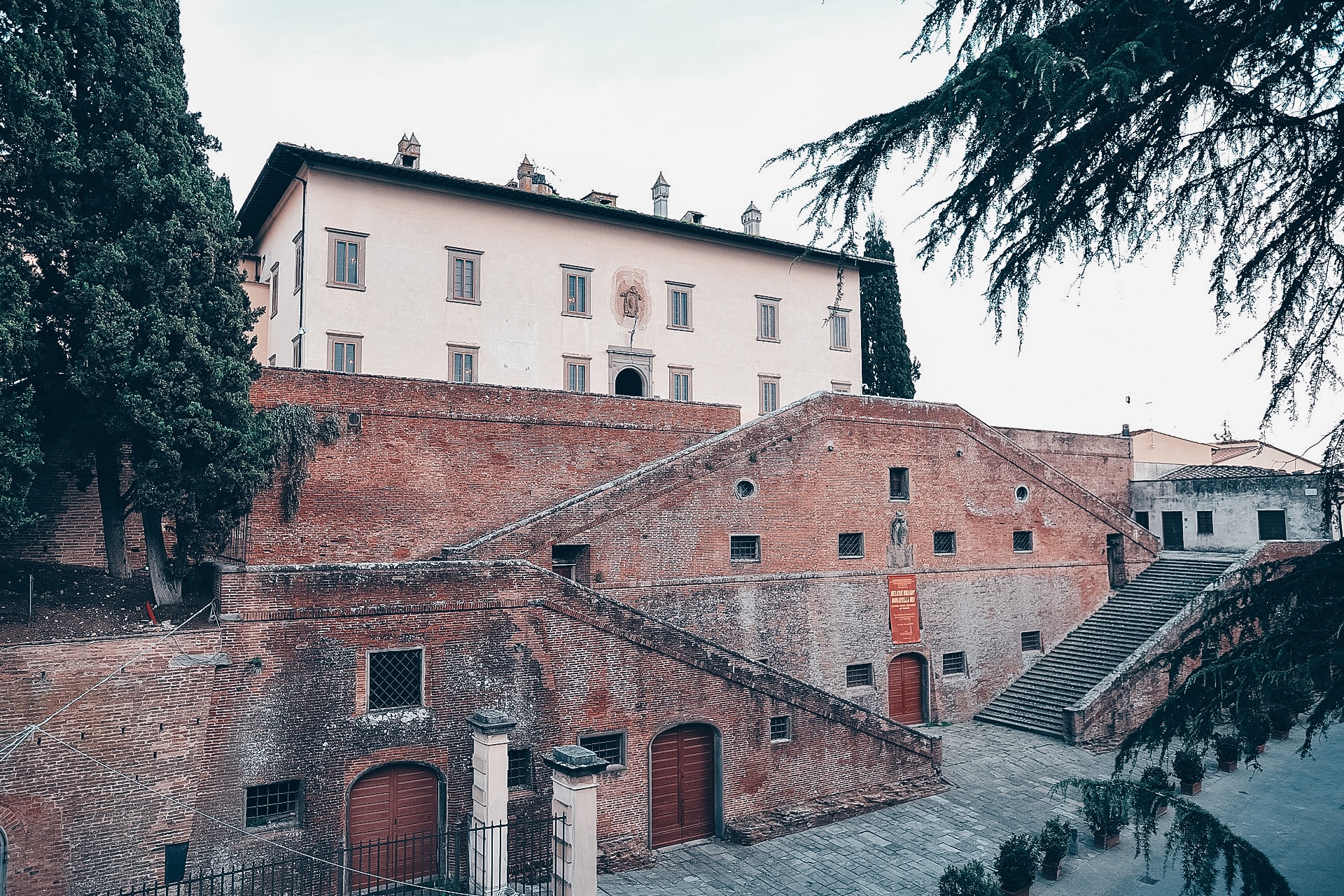