Anuradhapura is one of Sri Lanka’s oldest and major cities. It’s designated by UNESCO as a World Heritage Site because of its Sinhala civilization roots and rich Theravada Buddhist culture. Since the country is one of the ideal destinations for tourists looking for a peaceful vacation, visit this city during your trip to the country!

It’s hardly surprising that so many people head back to Anuradhapura year after year. This charming city is overflowing with wonderful things to do. Whether you’re interested in visiting tourist attractions or having a go at more thrilling activities, you won’t have a dull moment here.

This was the first place we visited in Anuradhapura and what a way to start. Abhayagiri dates back to the 1st century BC and was part of a 5,000 strong monastery. Originally it was over 100m high making it one of the highest structures of the ancient world. Only the Pyramids of Giza in Egypt were higher. The name Abhayagiri means ‘Hill of Protection’ or ‘Fearless Hill’. 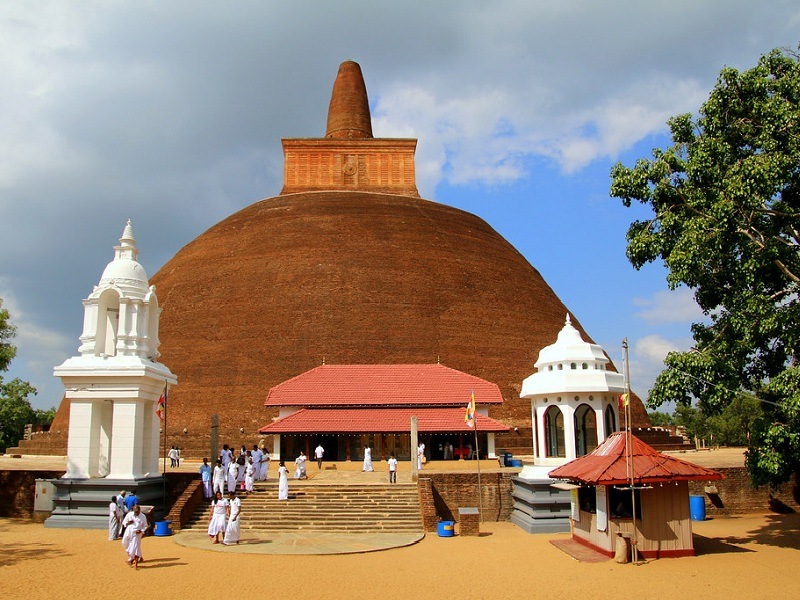 The Sri Maha Bodhi is a sacred shrine built around the southern branch of the sacred Bodhi tree which was planted in the 3rd Century BC – today, the branch from the original tree is supported by golden scaffolding. It is the oldest historically documented tree in the world and is one of the three symbols of Buddhist worship, the other two being the stupa and the image of Buddha. Buddhists have a strong belief that offerings made to this Bodhi tree will result in positive changes in their life. 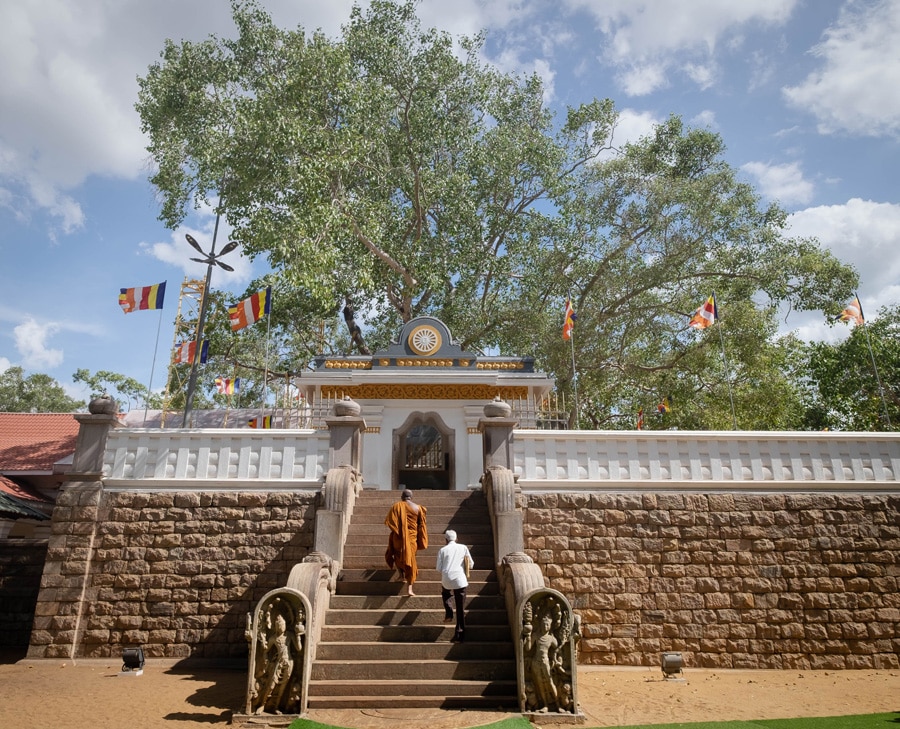 Ruwanwelisaya is one of the most important temples in Anuradhapura and a major place of worship in Sri Lanka. The massive stupa is painted a brilliant white and was built by King Dutugemunu in approximately 140 BC. The shrines and temple are adorned with lotus and jasmine flowers by devout Buddhist worshipers. You will need to remove your shoes to enter. 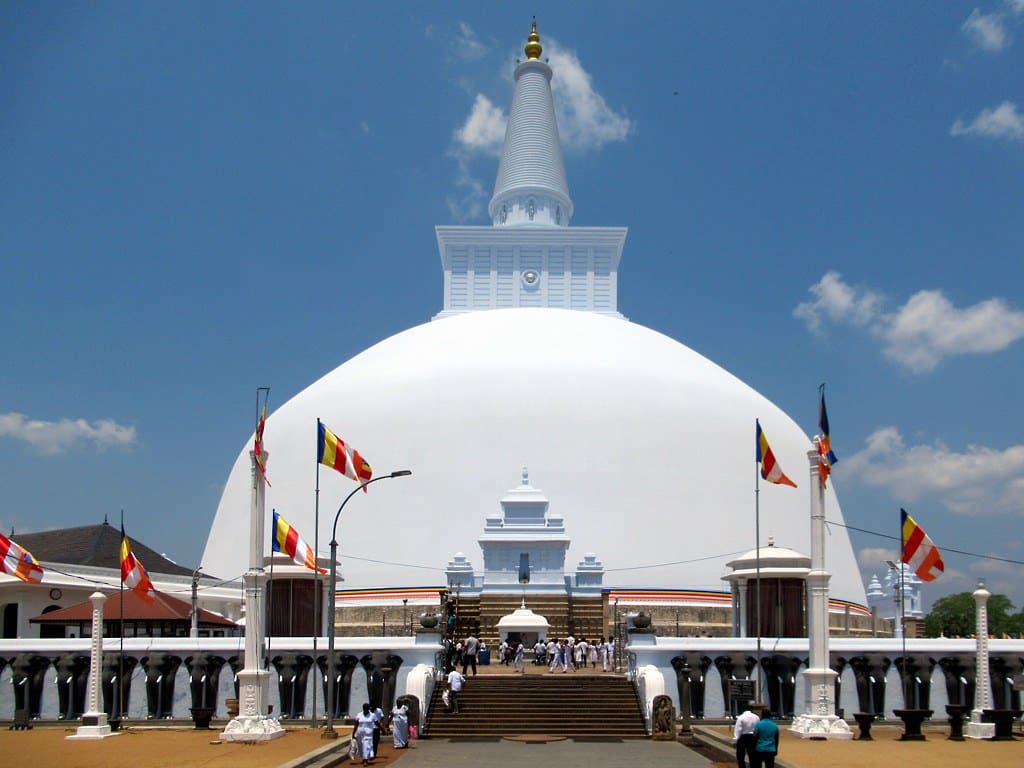 Built in 276-303 BC by King Mahasen, Jetavanarama is one of the tallest brick monuments in the world and contains sacred relics including gold folios containing sutras (scriptures) with Buddhist teachings, coins, ceramics, and other artifacts. For this reason, it is one of the most important temples in Anuradhapura. 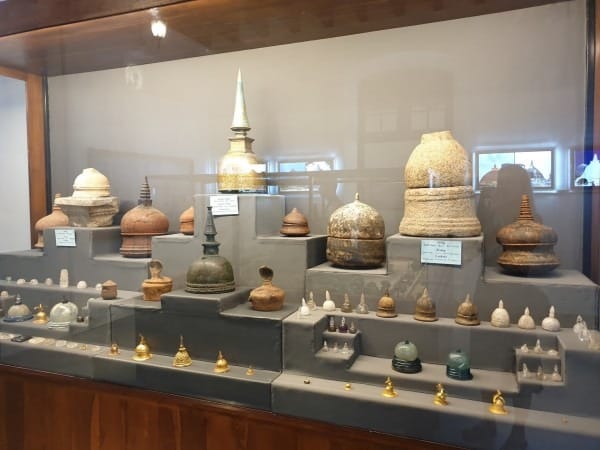 Yet another impressive Stupa in Anuradhapura. Jetavanarama Stupa was built around the 3rd century BC and was probably the 3rd tallest building in the world after the two great pyramids of Giza, Egypt. The huge dome is unplastered and is said to consist of over 90 million bricks!

The Isurumuniya Rajamaha Viharayawas was constructed by King Devanpiyatissa in the 3rd Century BC. During his reign, 500 children were ordained and the Isurumuniya was built as a monastic complex to house all of them. There are several carvings at the Isurumuniya, the most famous one being the Isurumuniya Lovers dating back to the 6th Century; the temple also features other stone carvings including the Elephant Pond depicting 4 elephants bathing, and The Royal Family. Admission to Isurumuniya Vihara costs 200 LKR. 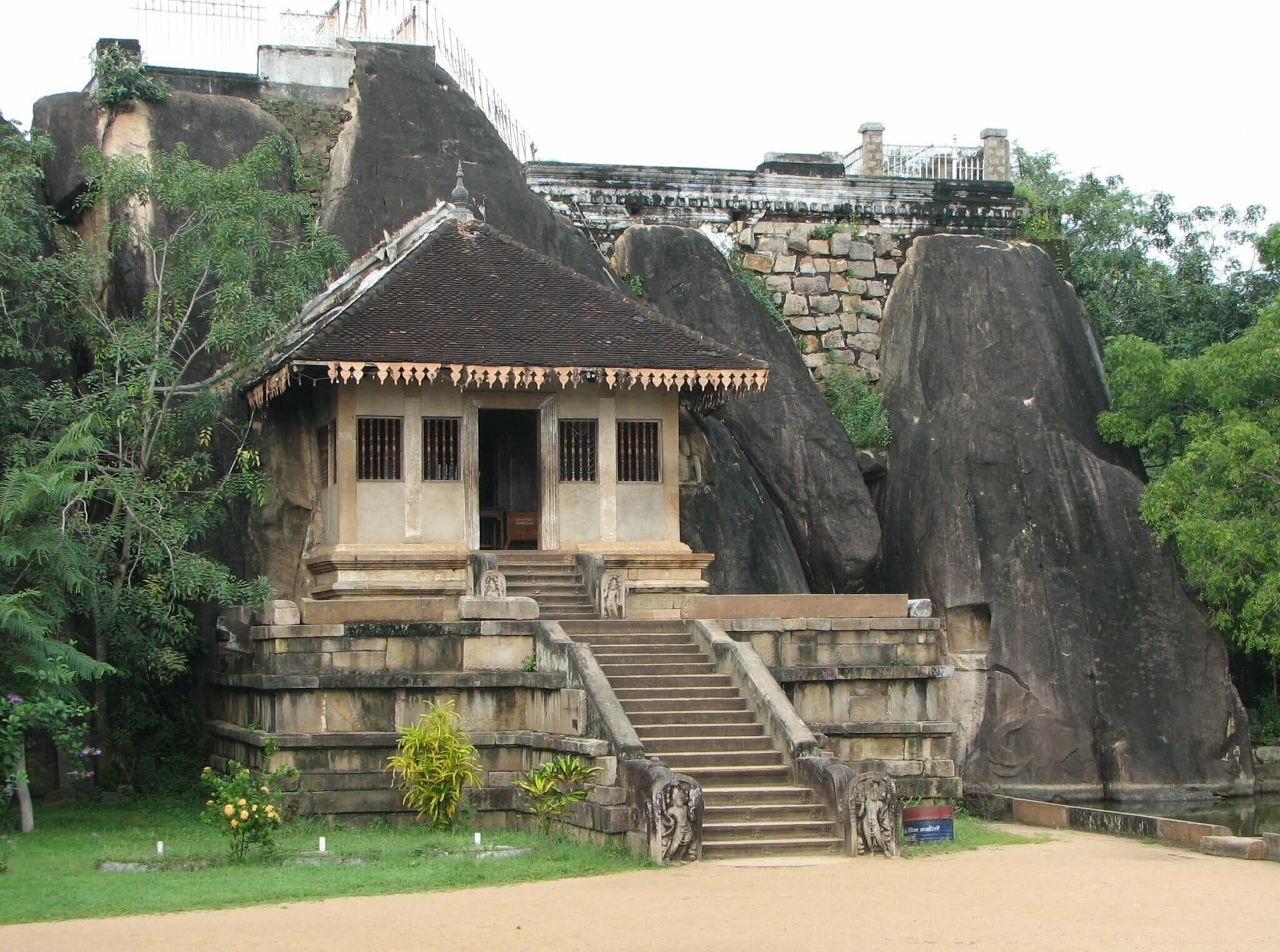 Most of this 8th century Palace is now in ruins but it is still an impressive place to stop off to enjoy what’s left of it. The place has a rich and bloody history. The monks of Ratnaprasada monastery often gave sanctuary to people in trouble with the authorities making them a target of the King. He sent a mob to attack the monks and destroy the monastery which then angered the general populace. They then attacked the King’s mob which eventually made the King back down and restore peace. 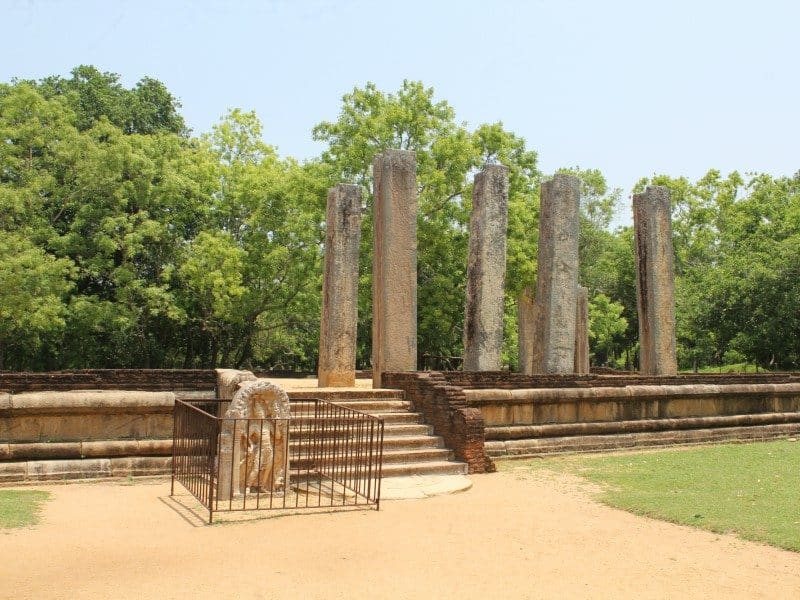 The first of the great Stupa’s was built around 2,000 years ago and Sandahiru Seya will be the newest addition. Commissioned by President Rajapaksa in 2010 this huge building will consist of over 30 million bricks and reach a height of 85 meters which will be just below the ancient Stupa’s height. The pace of construction has slowed so who knows when the structure will be finished.

It is amazing to think that these gardens are over 2,000 years old. Known as the park of the goldfish these pleasure gardens cover 14 hectares. They contain two ponds (hence the goldfish moniker) 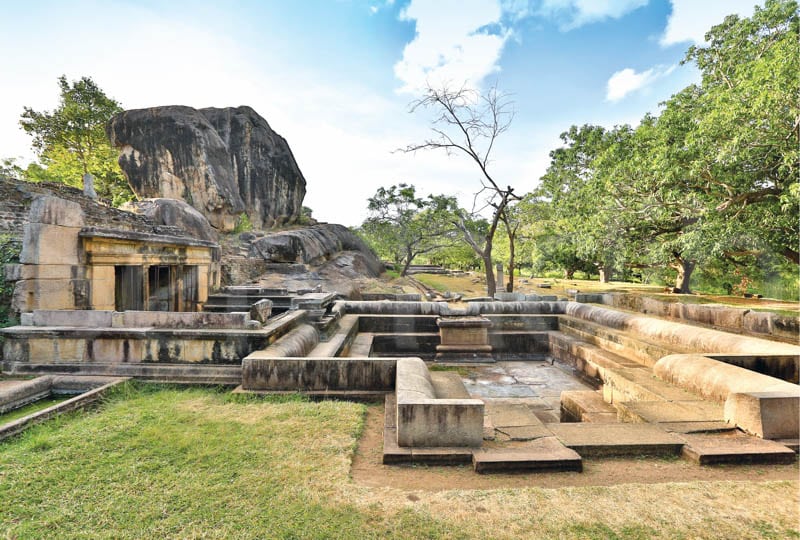 Welcome to the oldest Stupa in Sri Lanka if not the world! Thuparama Stupa was constructed by King Devanampiya Tissa in the 3rd century BC and is said to enshrine the right collarbone of the Buddha. As you walk around this Stupa imagine what Sri Lanka would have been like 300 years BC. The craftsmanship of the work is astounding. 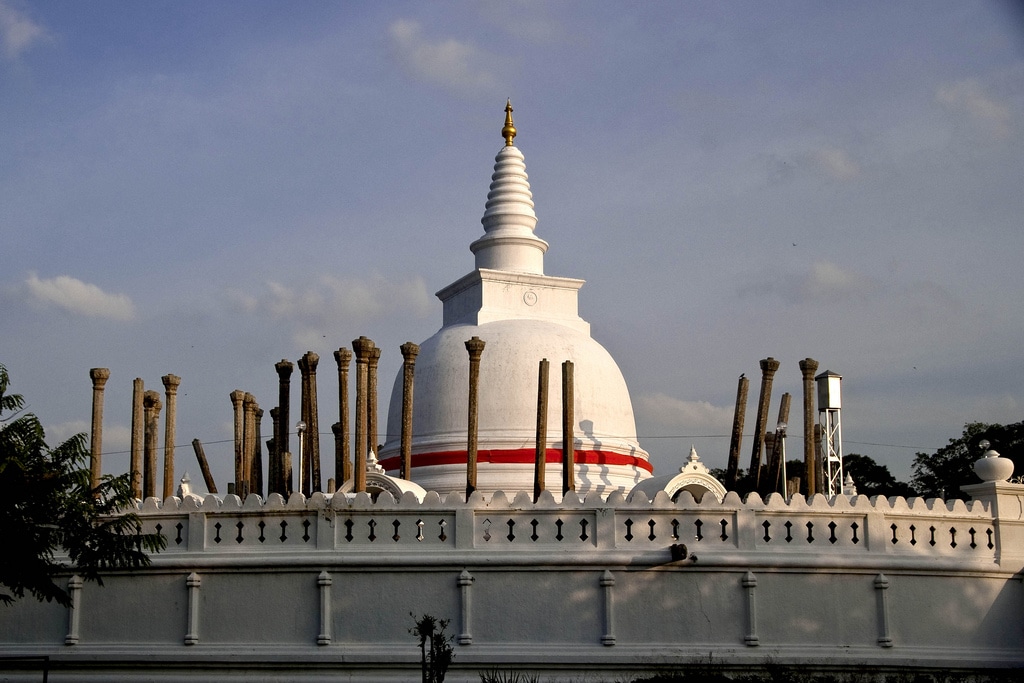 The Kuttam Pokuna in Abhayagiri is believed to have been built in the 8th or 9th Century for the water needs of the resident monks. The Twin Ponds feature stone steps leading into the water and are an example of Sri Lankan art and technology beyond its years. You are not allowed to step into the ponds but it is a beautiful piece of architecture not to be missed in Anuradhapura. 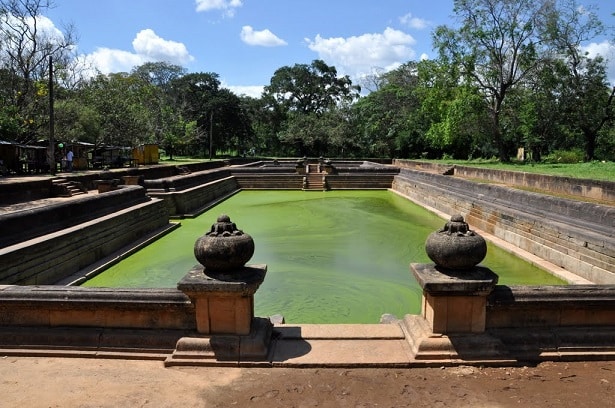 Sometimes when you visit a site as big as Anuradhapura the smaller things can get lost, but this ancient Moonstone made one of the biggest impressions on me. Sitting just outside a 9th-century monastery this elaborately carved moonstone is workmanship at its best. Try to see how many animals there are in the stone. 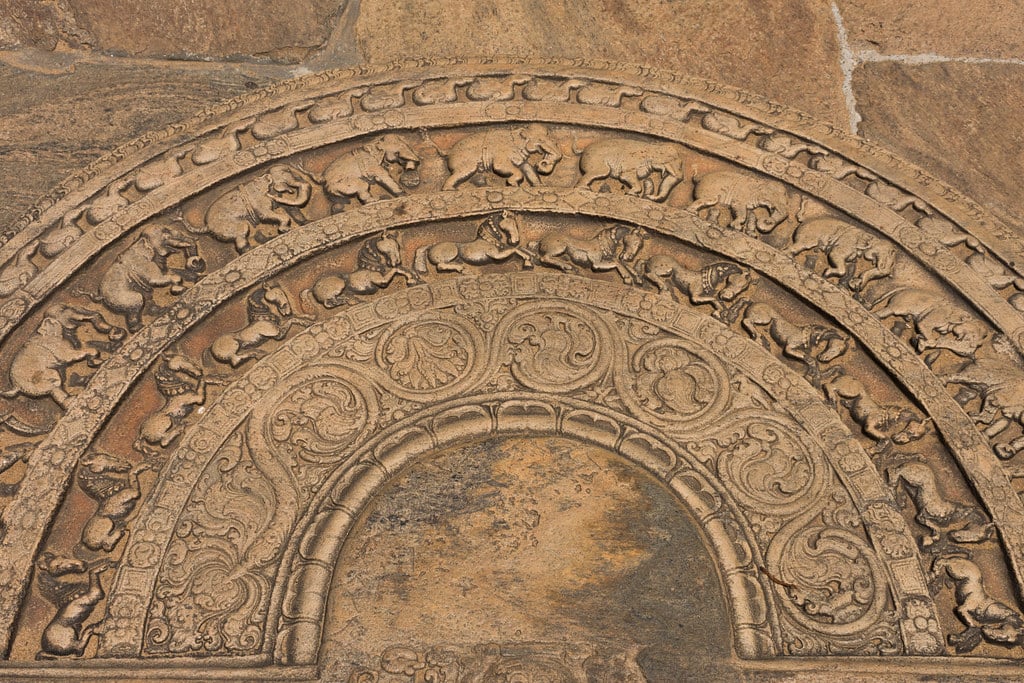 This ancient Stupa is said to have a relic of Buddha inside. It was built around the 2nd century BC by King Dutugemunu. Mirisavatiya Stupa is one of three sites (along with the Isurumuniya Vihara and Royal Pleasure Gardens) that can be visited in a stroll or bike ride along the banks of the Tissa Wewa.

This huge pond is thought to have been an ancient storage tank. It is so big you could fit over 6 Olympic size swimming pools in it. To this day the underground channels still keep the pond topped up. Those ancient builders knew a thing or two about engineering. 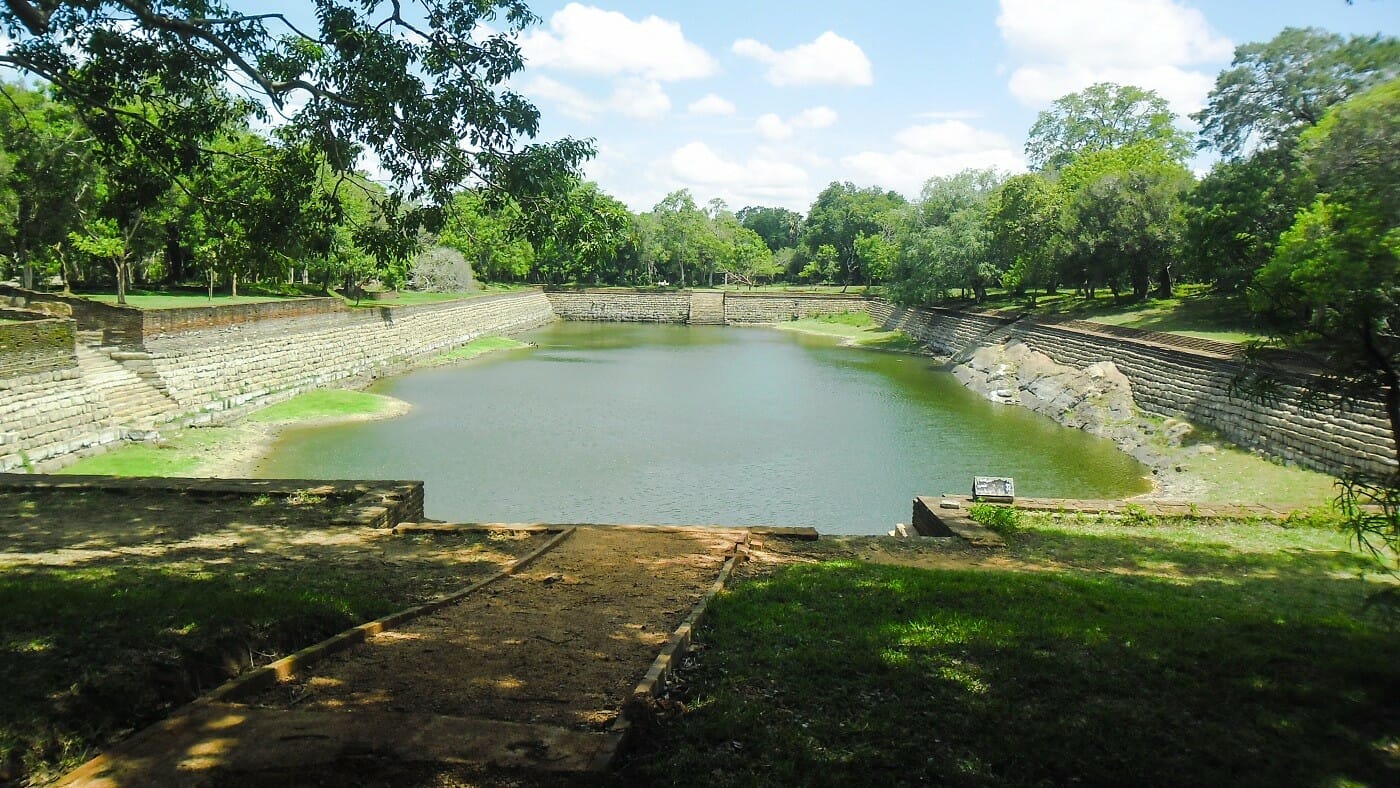 This site still has archeologists digging it and they are discovering things all the time. It is thought that this building was a college housing the foreign monks that came to visit Anuradhapura. It is more than likely that the Chinese pilgrim Fa Xian stayed here to study Sanskrit.

On the western fringes of Anuradhapura are little visited ruins including this former meditation center. If you want photos without the crowds in them, then this is your area. 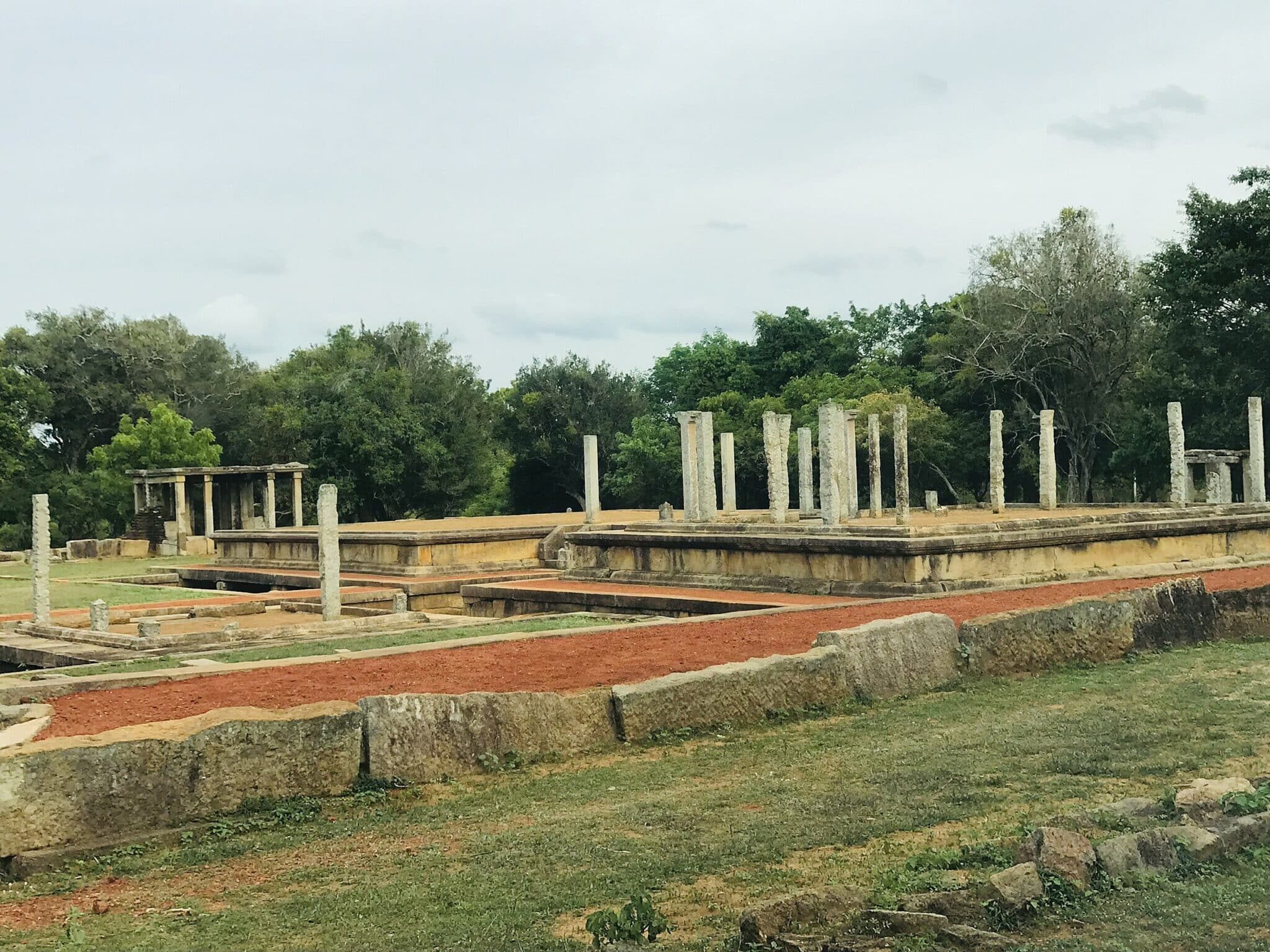 This man-made lake gives you spectacular views of the old city, especially around sunset. It was built around 20 BC and it covers around 12 sq km. 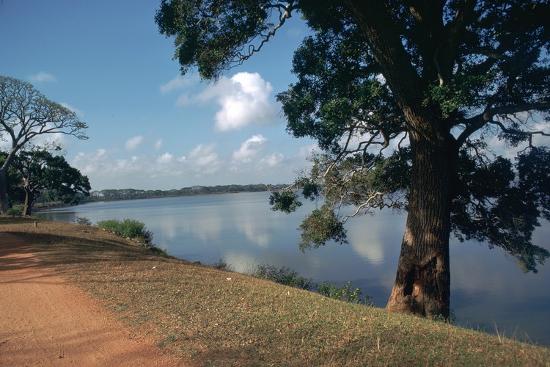 There are so many ancient buildings and ruins in Anuradhapura that many get overlooked. If some of them were in less significant places they probably would be the star attraction. Lowamahapaya or The Great Copper Roofed Mansion 260 BC. According to Mahavamsa, the great chronicle of the Sinhalese, Lovamahapaya was a massive nine-storied building with a height of 150 ft (47 meters) and each side with 150 feet (46 meters) long. 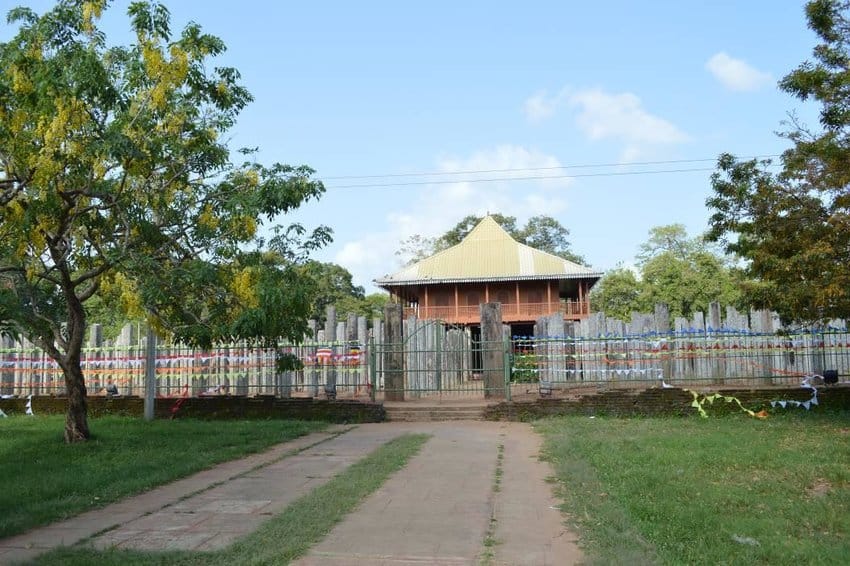 Hey everyone we are hoomies, hope you all are doing good and in great health ❤️ it’s been a while since we last connected and spoke about our amazing visit ... Read more