Things to do in Numana Alta

The small village that boasts one of the seven Blue Flags fluttering on the Doric coast is distinctive for its unpolluted nature and crystal blue waters, but its ancient beginnings make it appealing from a historical standpoint as well.

The intertwining of nature and history creates a 360-degree cognitive experience. Numana dates from the sixth century when it was inhabited by the Piceni, for whom it still jealously maintains many relics. 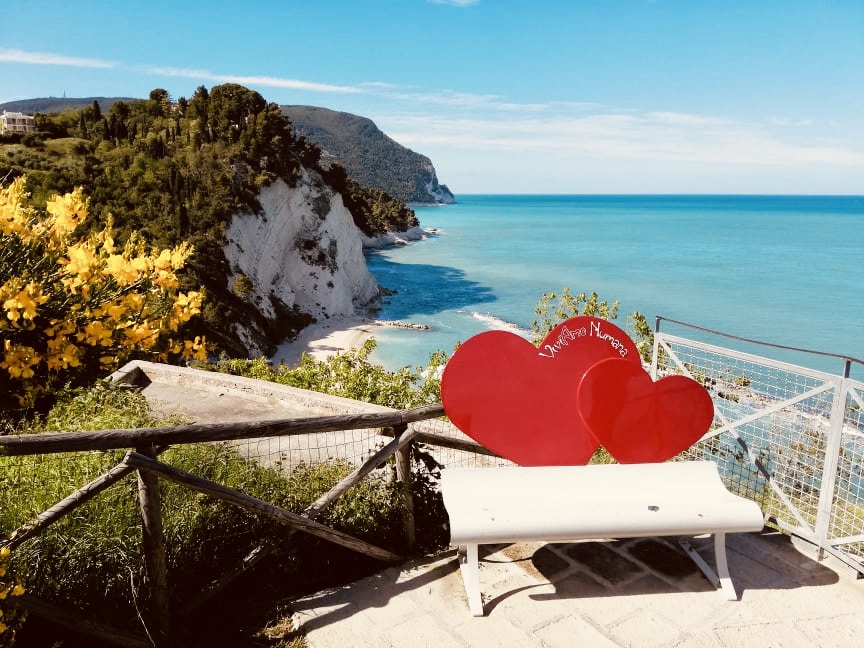 What to see in Numana Alta?

Walking is the best way to get in. The entry to the main plaza is alive with the colors of well-kept residences and flower-filled pathways, as well as the aromas of businesses offering traditional products and eateries. The Town Hall and the Sanctuary across the street form a beautiful architectural harmony and a warm environment.

The new Sanctuary was constructed in 1969 to replace the former church, which was established in 1566. Engineer Eugenio Belvederesi of Ancona oversaw the structure, which is distinguished by a wide triangular window on the bell tower through which light filters and illuminates the old Crucifix. According to legend, it went through many ups and downs before being placed in its current location. It is supposed to have been sculpted by Saint Luke the Evangelist and Nicodemus, and then transported to Beirut shortly before Jerusalem was destroyed. 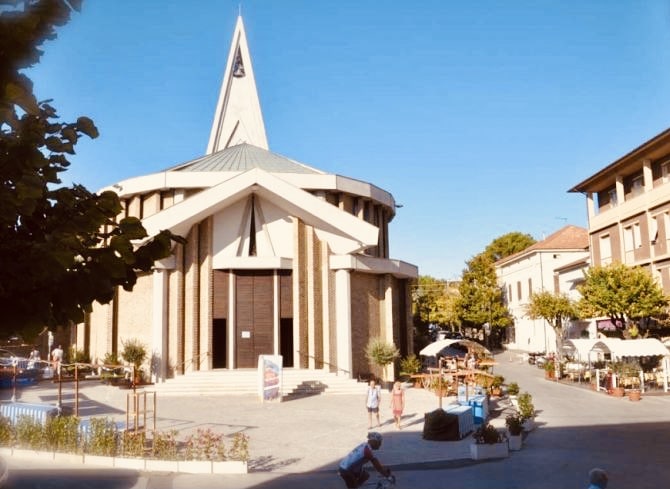 The rumor of its magical powers, on the other hand, piqued the interest of Charlemagne, who saw it as the ideal gift for Pope Leo III, forcing the emperor to dock near the port of Numana and leave the priceless gift there. It was held at the Church of San Giovanni until 846 AD when the town was severely damaged by an earthquake, and the crucifix was lost. It was discovered at sea by some fisherman in 1294 and brought back to town, where it found a permanent home after the creation of the Sanctuary in 1566.

The Bishop’s Palace of Numana, now the seat of the Town Hall Opposite the Sanctuary, the Palazzo Comunale, was built in 1773 at Cardinal Bufalini’s request to serve as a summer house for the Bishops of Ancona. 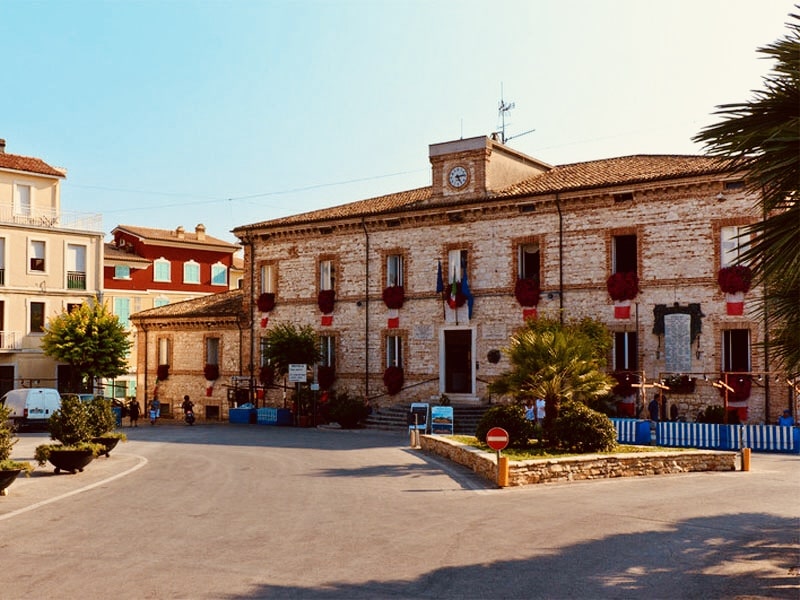 Despite the suppression of ecclesiastical properties following the establishment of the Kingdom of Italy in 1911, it remained with the Church until 1928, when it became the municipal headquarters. It hosted an accordion manufacturing from that year until 1966, and following a comprehensive restoration, it was reopened as the municipal seat in 1983.

Piazza Nova and the panoramic terrace

Continue to the left from the plaza to Piazza Nuova, where the Love Bench “ViviAmo Numana” (on social media #panchinadellamorenumana) and a massive stone crucifix are located. From here, a unique spectacle unfolds on Monte Conero, the Spiaggia del Frate, and the port of Numana, with hues that are unforgettably beautiful at sunset. 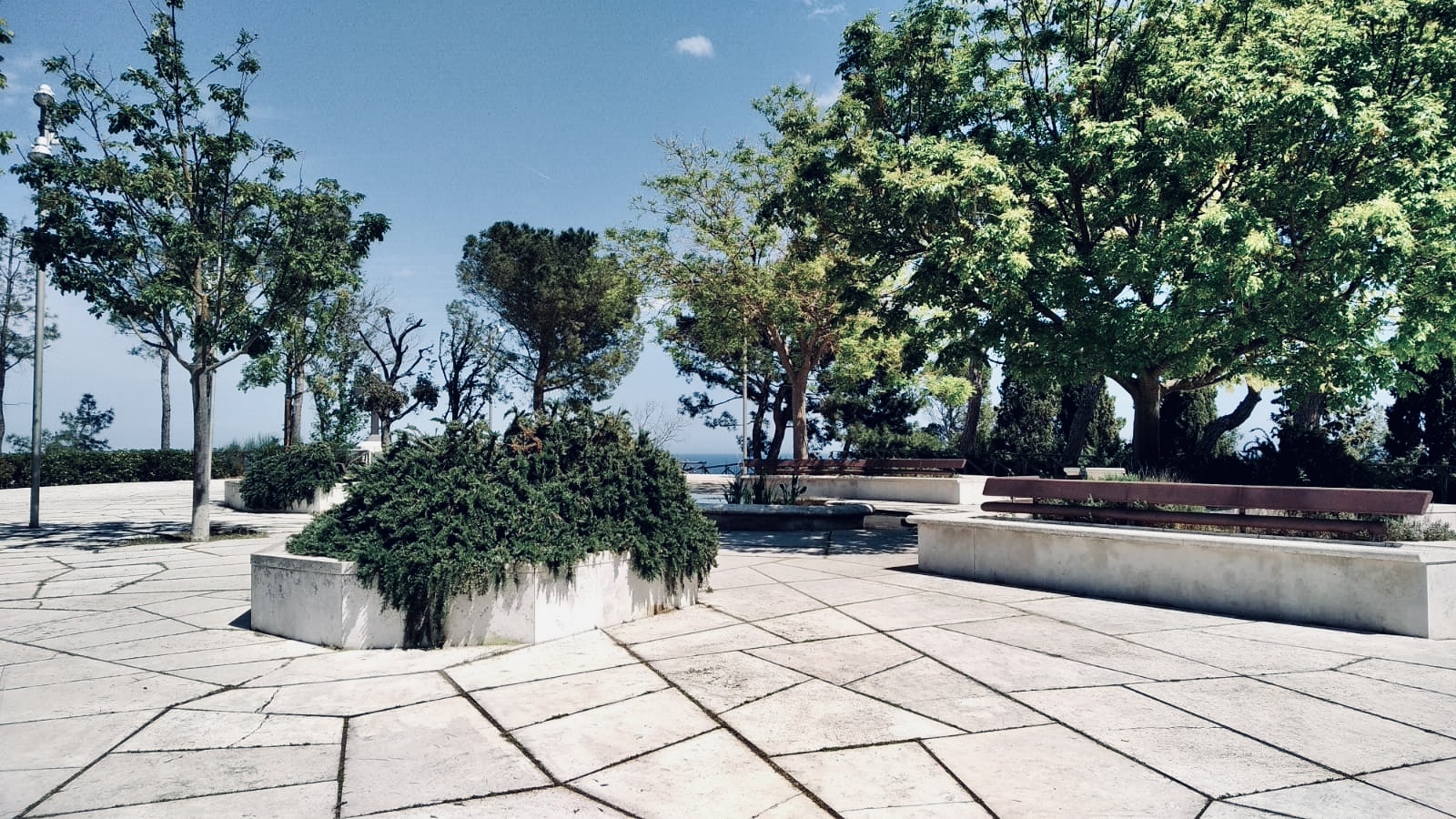 The fountain on the left, in front of the SS Crocifisso, was created in 1633 for pilgrims traveling from Loreto. The one we see today dates from 1968, when it was reconstructed alongside the new Sanctuary, with only a few original pieces remaining. The inscription “terme exaruit” on the old fountain recalls when the jet nearly totally dried up over an undefined period, the four “mountains” at the top, and an antique coat of arms of Numana in the center.

The Roman circus is a ruin

Shortly after the aqueduct, behind a gate that is difficult to discover, there is also a colossal ruin that gives evidence to the Roman era. 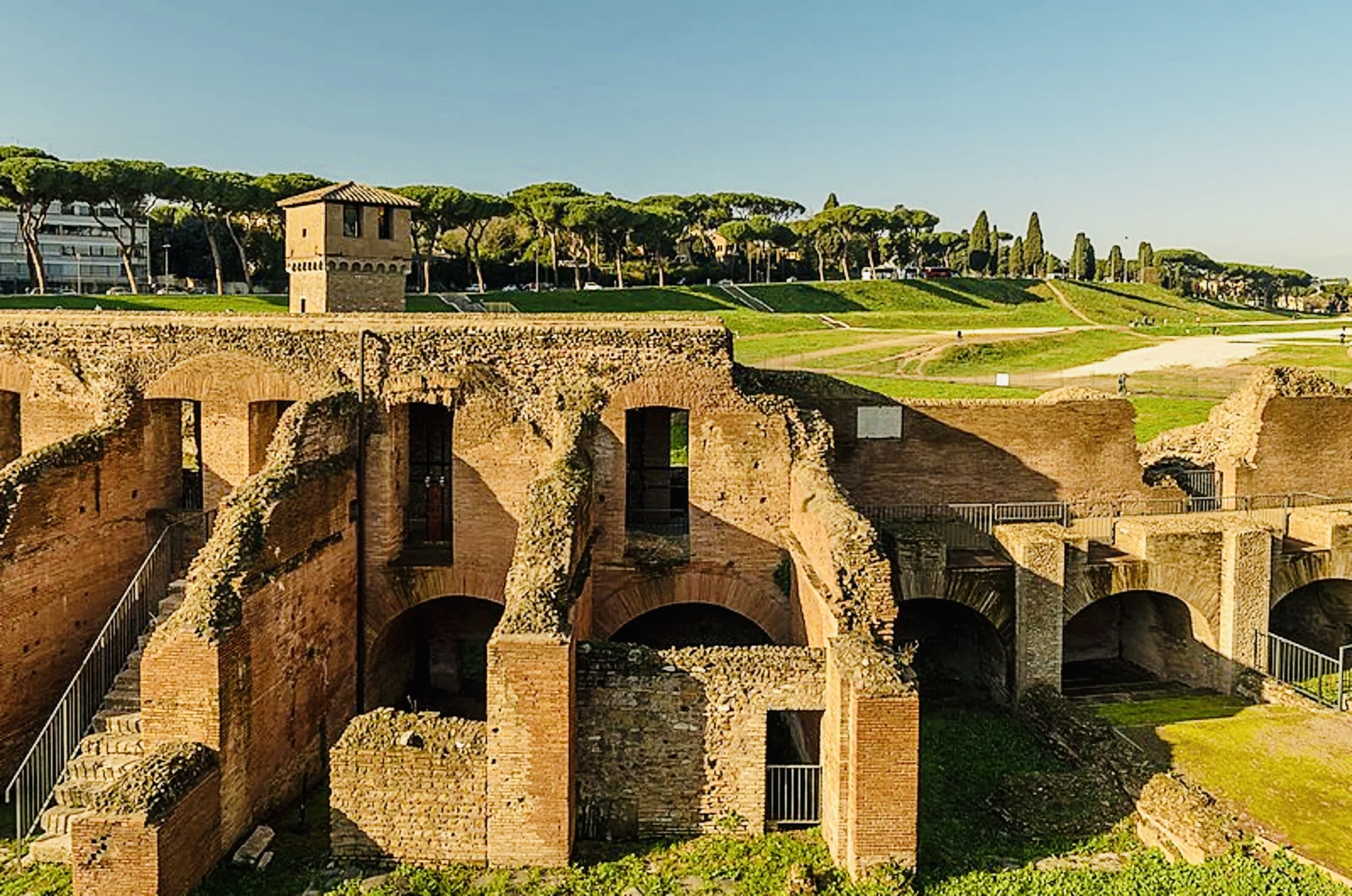 Another Belvedere can be found by continuing from the main square along via Roma and then into via della Torre. The bronze monument of the Fisherman, built by Johannes Genemans in celebration of the men of the sea, their ideals, and their enthusiasm, is welcomed in Piazza della Torre.

Returning to the main plaza, Via IV Novembre may be found on the left, just before the junction to descend down to the right towards the Spiaggiola. The Costarella is another name for the Costarella. A long staircase that serves as a shortcut to the port is another Numana symbol.