What are you most interested in when you go to visit a city? To the squares? To the churches? To the monuments? To museums?

Here, here we will talk about the Florentine state museums, some already discussed in the post “Firenze“.

The Gallery will take you back in time, walking under frescoed vaults. Enjoy a stroll through the Sala dei Primitives (room 3), greeted by three huge altarpieces by Duccio, Giotto, and Cimabue. In the room on your right, you will take a step forward towards the fifteenth century: spears painted by Paolo Uccello, the Madonna del Solletico by Masaccio (room 8), and even further ahead a spectacular diptych of the Dukes of Urbino painted by Piero della Francesca await you (room 9). Look for a Carmelite friar among the painted gazes and grasp the beauty of the “Lippina“, a masterpiece by the painter and friar Fra Filippo Lippi. The gentleness of these features will introduce you to the extraordinary works of Sandro Botticelli, such as the Birth of Venus and the Allegory of Spring. Allow yourself a few more minutes in this grandiose room (rooms 10-14), originally occupied by the Medici theater. The next room is one of the most crowded to admire Leonardo’s only painting, a splendid Annunciation from his youth. The succession of works is fascinating and breathtaking: in the loggia, you can admire the Tribune and enjoy the unmissable 180 ° view of the San Miniato hill, the Bardini Gardens, the Boboli Kafeehouse, and finally the Ponte Vecchio from the “bridge head”. By now you have only visited a quarter of the museum! Michelangelo and Tondo Doni await you a little further on, then following towards the Sala della Niobe and the landscape painters. To retrace the entire corridor on the first floor back towards the exit, walk along with the collection of Hellenistic statues, passing through the rooms of the Mannerist painters, Bronzino, Raphael, and the new rooms dedicated to Correggio, Titian, and Parmigianino.
The best suggestion is to book access from 4:00 in the afternoon. It will be the best time to enjoy the museum with a quieter atmosphere and enjoy the sunset from the windows of the Loggia della Galleria.

The Galleria dell’Accademia in Florence is the most famous and most visited museum in the Tuscan capital and the second most visited in all of Italy. It is also called the “Museum of Michelangelo” because, among the museums around the world, it is the one that exhibits the largest number of statues by the famous Italian Renaissance artist. First of all the David, a symbol of Florence in the world and a masterpiece of the Renaissance, brought to these environments in 1873 to protect them from the elements. With its beauty and strength, Michelangelo’s David symbolizes the virtue and freedom of the Florentine Republic, embodied by the Palazzo Vecchio, in front of which the statue was originally placed. In addition to the statue of David, the famous sculptures by Michelangelo called Prisons, originally located in the Boboli Gardens, the San Matteo, and the Pietà di Palestrina are kept at the Accademia Museum. In addition to Michelangelo’s masterpieces, among the many works kept in the Accademia Gallery, the Rape of the Sabines by Giambologna, the Madonna with Child and the Madonna of the Sea by Botticelli and some works by Perugino, Filippino Lippi, Pontormo and Bronzino are worth a visit. The Academy also houses a splendid collection of tables with a golden background by Florentine masters from the period between the thirteenth and sixteenth centuries, the collection of Russian icons that belonged to the Lorraine family, and the collection of paintings owned by the Grand Duke Leopoldo. 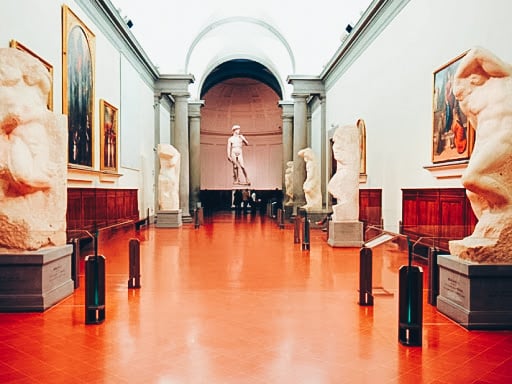 It is home to several very important museums and galleries:

Palatine Gallery and Royal Apartments: this is an extraordinary collection of Renaissance and 17th century paintings commissioned by the Lorraine in the Pitti Palace to give the definitive location to the works belonging to the Medici family.

Museo degli Argenti: it is often also called the “Medici Treasure“. Today its official name is: “Treasure of the Grand Dukes“. This museum constitutes one of the most varied and interesting collections in the city of Florence, a witness to the refinement and modernity of Florentine Renaissance production and artistic sensitivity.

Museum of Fashion and Costume: it exhibits more than 6,000 pieces, including clothes and fashion accessories from the 18th century to today. The collection includes court and gala dresses, uniforms, haute couture dresses, prêt-à-porter pieces, theatrical and cinematographic stage costumes.

Boboli Gardens: can be fully considered an open-air museum. It is one of the most important examples of Italian gardens in the world and boasts an exceptional number of precious classical sculptures, buildings such as the Kaffeehaus, the Limonaia, and the Casino del Cavaliere, fountains, and caves.

Built by Michelangelo and Buontalenti between the 16th and 17th centuries, the chapels are the mausoleum of the Medici family and guard their tombs. The main rooms of the Museum of the Medici Chapels are the New Sacristy and the Chapel of the Princes which can be accessed, with an independent entrance, at the rear of the church. The museum also houses a part of the Treasury of the Basilica of San Lorenzo, consisting of sacred reliquaries and hangings.

It is one of the most important Florentine museums that boasts in its collection unmissable works by Donatello, Luca della Robbia, Verrocchio, Michelangelo, Cellini. His collection of bronzes, enamels, majolica, tapestries, furniture, and fabrics belonging to the Medici family or to private collectors is also of rare value. On the first floor the 14th century sculpture including Donatello’s David, masterpieces by Ghiberti, Brunelleschi, Verrocchio, and Luca della Robbia. On the ground floor, 16th century Tuscan works: Michelangelo, Sansovino, Ammannati, Cellini, Giambologna. Of inestimable value are the collections on the first and second floors defined as “minor arts”, which include works in ivory, majolica, enamels, goldsmiths, bronzes, glass… and the rich Medici medal collection.

The visit includes the splendid architectural spaces of the convent and cells, the cloister of Sant’Antonio, the Cenacolo del Ghirlandaio, the Refectory, and the Chapter hall. True jewels are the works of Beato Angelico, among which we remember the Annunciation, a masterpiece of Renaissance painting. In the Hall of the Hospice, entirely dedicated to the artist, the Deposition, the Triptych of St. Peter martyr, the Altarpiece of Annalena, the Last Judgment, the Altarpiece of San Marco, the Madonna, and Child, and the Tabernacle of Linaioli are preserved. The frescoes on the second floor, which are located in the part of the building where the friars’ cells were, are also prominent works of the Renaissance and absolute masterpieces by Beato Angelico himself. The Museum also includes a considerable number of works of inestimable historical-artistic value, first of all, the Last Supper by Ghirlandaio, then the Madonna with the belt by Ridolfo del Ghirlandaio, the Madonna, and Child by Paolo Uccello, and minor works such as the famous portrait of Girolamo Savonarola and the invited terracottas of the Della Robbia. 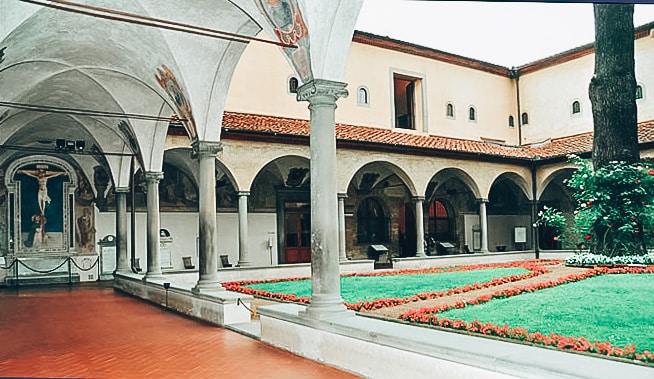 The main masterpiece of the museum is certainly the famous Attic black-figure crater called “Vaso François” (from the name of its discoverer). The vase dates back to around 570 BC. and it is the oldest known Attic crater. To stay with the Greek works, two kouroi are also very important, two marble statues also dating back to the archaic Greek period: ‘Apollo Milani and Apollino Milani. Among the Roman works, we point out two large bronze statues: the Idolino of Pesaro and the Horse’s Head. Among the Etruscan ones, there are other large bronzes: first of all the famous Chimera of Arezzo, then the Minerva and the Arringer. Some funerary sculptures are also very important: the Mater Matuta in fetid stone, the Sarcophagus of the Amazons in painted marble, and the Sarcophagus of Larthia Seianthi in polychrome terracotta. 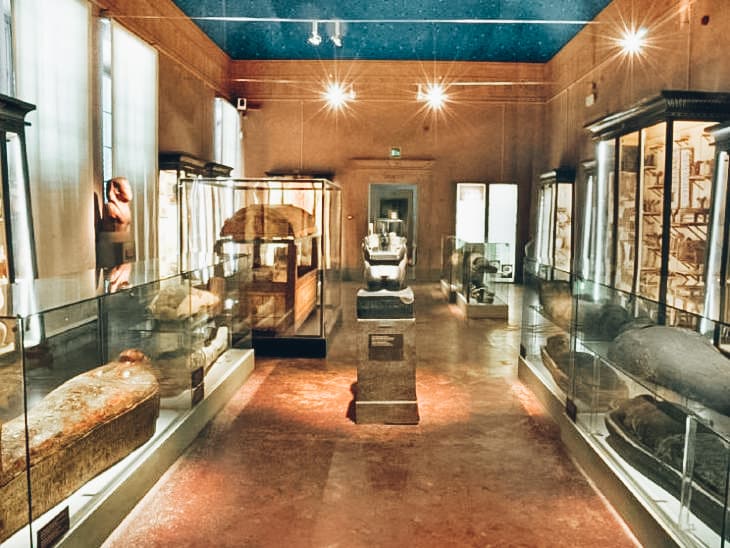 Obviously, there are many other Florentine museums, including municipal and private ones, but we will talk about them in another post 🤗